In an effort to preview this year's slate of ACC bowl games, I'm gonna break down some interesting statistics that aren't always covered by the big time media types. Most of the stats are originating from the realm of fantasy football. Today's focus is how teams in the ACC have fared against tight ends in conference play.

Zach Pianalto was easily the cream of the crop until he broke his fibula 6 games into the season. He led ACC tight ends with around 51 yards per game before going down. Andre Smith of Virginia Tech emerged as a go to receiver and caught 5 touchdown passes from Tyrod before the regular season ended. Speaking of touchdowns, here's how many TD passes to the tight end each ACC team allowed (in ACC play): 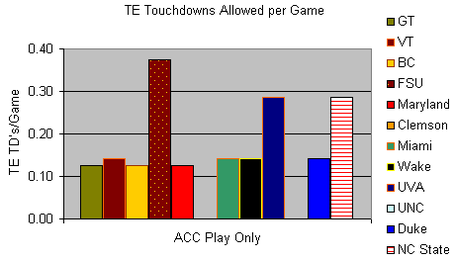 FSU has the worst rate per game but they only allowed three tight end touchdowns in 8 games. That's not horrible. Considering no ACC tight end was ranked above 17th in yards, touchdowns, or receptions in ACC play, this leads me to believe that the ACC's 2010 crop of tight ends didn't produce as well as hoped offensively. In fact, only three ACC tight ends had 2 touchdowns in ACC play: Cooper Helfert, George Bryan, and Colter Phillips.

Keep in mind that in all of these charts I have negated one game from every team's schedule that faced Georgia Tech. We don't implement tight ends so teams shouldn't benefit statistically from that fact.

The next factor that's important for tight ends is yards per catch. Are tight ends gashing certain defenses in the ACC? Whose linebackers are stopping the underneath routes? 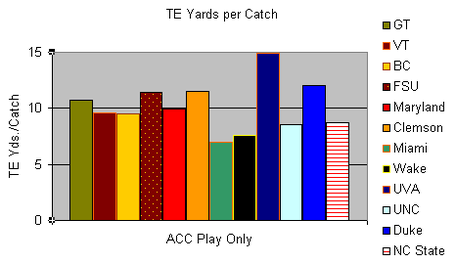 As if UVA didn't already know their transition to the 4-3 was bad... It was so bad that the Wahoos are giving up about 20% more yards per catch than the second-worst team (Duke). I wasn't surprised to see Miami as the #1 tight end stopper considering they're also the ACC's #1 pass defense. And the oddest outlier is the Clemson defense. They allowed the 3rd fewest passing yards in conference games but allowed tight ends to gash them for 44 yards per game. 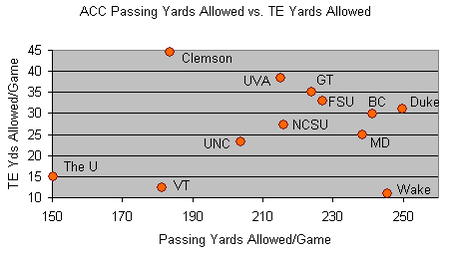 Any interesting topics you would like to see discussed in build up to bowl season? Do you have any thoughts on the tight end defense post above?