Share All sharing options for: The Georgia Bulldogs and Field Position Efficiency

This is a chart that I've become quite fond of. It shows what percentage of the time a drive results in a touchdown, punt, field goal attempt, or turnover based on the starting field position. For example, the following chart will show that in 2010 UGA's offense has scored a touchdown on 31.6% of its meaningful drives no matter the field position ("<100 yards" category). And if a UGA drive starts within 30 yards of its opponent's end zone, there's a 50% chance UGA will score a TD. 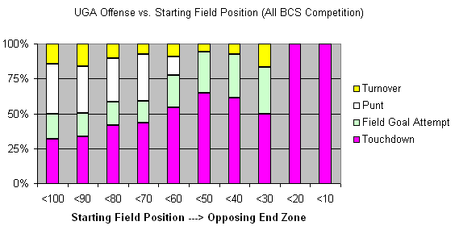 The Bulldog defense has been pretty impressive compared to the offense. The Dog defense only allows touchdowns on 25.6% of its opponents' drives. Better yet, the special teams and offense haven't allowed a BCS opponent to start a drive within the Bulldog 21 all season. No one is getting easy touchdowns against the Bulldogs. Only 7 opposing drives have started with field position on the Bulldog side of the 50. 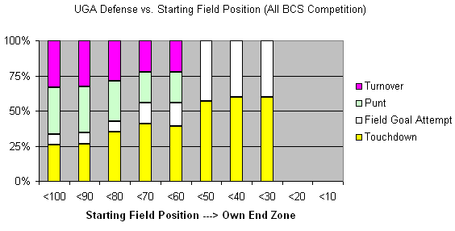 The skinny is simple. We've gotta get good field position against the Bulldogs in order to score because the 2010 Jackets aren't immune to field position like the 2009 Jackets were. We're gonna have to get a good defensive effort from Al Groh & Company in order to prevent the Tech offense from being pinned deep all game long. Our special teams has to prevent big plays and limit its mistakes.