The Georgia Bulldogs And Third Down: The Scenario Of Crucial Significance

Share All sharing options for: The Georgia Bulldogs And Third Down: The Scenario Of Crucial Significance

How Does Georgia Distribute The Ball By Down? 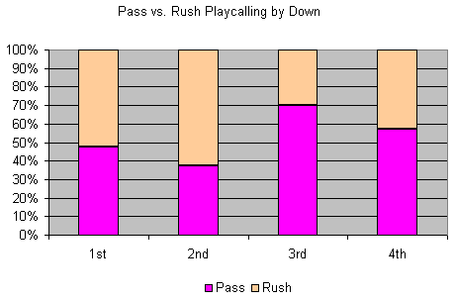 Yesterday, Bird broke down the Georgia passing game. This morning, he told you how the Bulldogs distributed the ball for their running game. For this afternoon, I want to take a look at what Georgia does on 3rd down. Defending third down is crucial for the Yellow Jackets and casual observations lend me to believe that it is one of the greater weaknesses of Georgia Tech in 2010. All numbers, statistics and assumptions are based off of box scores or cfbstats.com. This week's opponent features a run-heavy offense on 1st and 2nd downs with the pass being the influence on 3rd down. With our known struggles on third-down, I believe that this down will continue to amass the crucial points in the game where the Jackets must take the advantage. Today, I will look at what georgie does on third down, how they convert, along with how our defense performs on third down.

Below, we see the distribution. In short yardage situations, the Bulldogs are deadly accurate.

How does the Georgia Tech pass defense look in these similar situations?

Not quite what we wanted. The Yellow Jackets give up the necessary yards for the opponent to convert on third down a majority of the time. A.J. Green turned the uga offense around when he came back and he must be kept under wraps if the Tech defense wants to get off the field.

The breakdown is as follows:

We see that georgie averages a conversion on short yardage situations and that the majority of these third down attempts are also made within these same scenarios. Naturally, the Jackets must remain tight on defense during first and second down to prevent these short yard, third down settings, and as we see below, Georgia Tech gets the job done fairly well in these situations.

Nothing new was revealed about the Georgia Tech defense this afternoon. Instead, we showed where the Bulldog offense flourished and floundered.  Third down is absolutely critical for the Yellow Jackets should they want to remain competitive in the game. They must neutralize the passing situation.