UGA's allocation of carries in the 2010 season

Share All sharing options for: UGA's allocation of carries in the 2010 season

Before I start, I wanted to share one of the more interesting stories I heard about the Ramblin' Reck, which directly involved the University of Georgia mascot Uga. In 1974, the Reck was repainted and the color changed from its old mustard to its current shining old gold paint scheme. Bobby Dodd himself chose the modern paint scheme from a Lincoln paint catalog and because of this Dodd wanted to show off the Reck during the 1974 season. So in 1974, the Reck traveled to Clemson, Auburn, and Durham before the annual Thanksgiving showdown in Athens.

According to a former UGA associate athletic director I met at the 2007 Doc Ayers/Ray Beck Celebrity Golf Tournament, Bobby Dodd received a message from the UGA athletic department stating that Sanford's field had recently been re-sodded and couldn't support a vehicle loaded with cheerleaders. Dodd responded with a simple telegram, "If Uga ever wants to set foot in Bobby Dodd Stadium again, the Reck will drive on the field." UGA's athletic department caved and the Reck led the team onto the field. Tech proceeded to dismantle the Bulldogs to the tune of 34-14.

Unlike the passing game, one can read more into which running back is on the field and receiving carries based on the down. A clutch, tough runner is going to be receiving third down carries. And in 2010, Washaun Ealey has received 72.2% of the third down running back load. 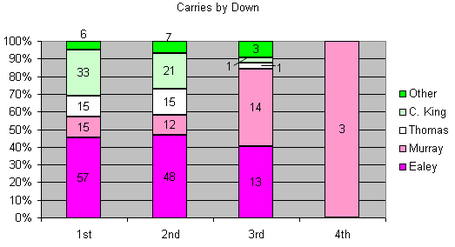 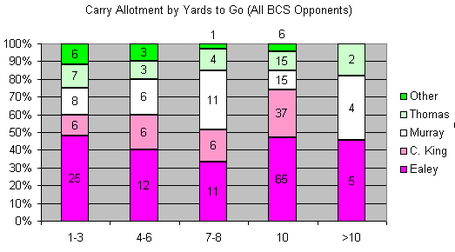 Another interesting note is that half of the 10 yards to gain "Other" carries are reverses to A.J. Green. They've called this play four times on the season. Three times on 1st and 10 and once on a 2nd and 7.

I guess my concerns are about the same as most Tech fans at this point. In 2009, the Dogs only averaged 124 yards rushing per game coming into the Tech game. We gave up 214 yards over their average. This year they're actually rushing for about 139 yards per game against BCS-calibre opponents and their schedule is arguably tougher than 2009's. I just hope we're watching and rewatching the drubbing our run defense suffered last year in film study this week. Even then, I think it'll take a 2008 offensive effort to win this game. Any thoughts?