Share All sharing options for: Let's break down the Georgia Receiving Corps

In an effort to find trends and tendencies of the UGA offense, I began breaking down the passing game of the Bulldogs. The first group of data I attacked was receiver looks based on downs and distance. Because every down can have a completely different distance and situation, it's difficult to pull any sort of conclusions from the receiver look versus down chart below (chart excludes Idaho State and UL-L data): 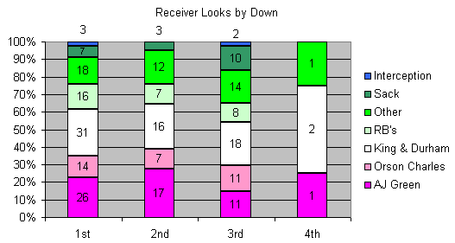 The best news for Tech fans is that Georgia has given up a gaggle of sacks on 3rd down passing situations. They've gotten the ball off to A.J. Green only one more time than they've been sacked on 3rd down. Out of 235 balls that have left Aaron Murray's redshirt freshman hands against BCS-calibre opponents, only 23.4% of the passes were directed towards UGA's most prolific receiver since Terrence Edwards. This doesn't take into account the fact that A.J. missed the first three BCS-calibre opponents on the Dog schedule.

In UGA's first 3 BCS games, the dogs attempted to pass 29.7 times on average. Since A.J.'s return they've thrown about two fewer passes per game and completely rerouted the offense around A.J.'s abilities. That's why if we try to analyze the UGA passing offense based on the first nine games of BCS calibre, we get a chart showing a fairly well-distributed and balanced attack rather than the Green-fest that the offense has morphed into. 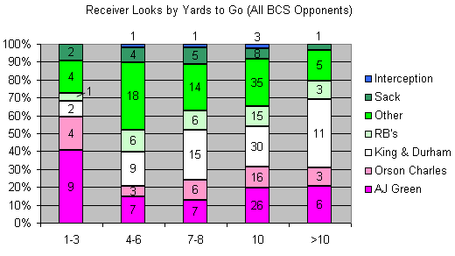 To give you an idea of how much the offense has changed since its first three games, the number two and three receivers Tavarres King and Kris Durham and the tight end Orson Charles were getting about 14.3 looks/game in the first three games. The running backs and back up wide receivers were getting about 11.7 looks per game. Since A.J.'s return, King, Durham, and Charles looks have reduced by 53.6% and the running backs and backup receivers have lost 47.1% of their looks per game.

A.J. Green is a football vacuum. If the ball is in the air, there's a good chance it was directed towards Green. The simple reason for continually sending airmail via A.J. is that he has caught 59.3% of all the passes sent his direction as opposed to Orson Charles (56.3%), Kris Durham (56.8%), and UGA's primary running backs (54.8%). Only Tavarres King has a better reception percentage (70.0%) but he's a sophomore and I guess waiting his turn for more balls after A.J. leaves this postseason. 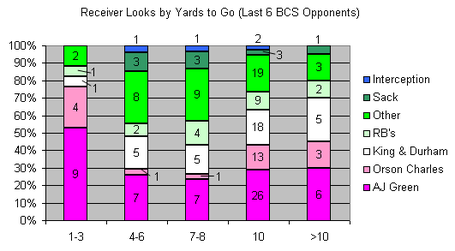 The last 6 BCS-calibre opponents give us a clearer picture of what to expect against UGA come Saturday. To me, it appears that A.J. and Orson Charles are getting a lot of looks on short yardage downs due to play action. Other than that, Charles is all but forgotten by the Boboffense.

What are your thoughts? Do you see any interesting points worthy of discussion?