When Does Virginia Tech Move In For The Kill And How Does It Affect The Georgia Tech Yellow Jackets?

Share All sharing options for: When Does Virginia Tech Move In For The Kill And How Does It Affect The Georgia Tech Yellow Jackets?

The game on Thursday makes me nervous as Clemson played the role of reality and slapped us across the face (again). So in preparation for the game the game this week I wondered:

"If it exists, can we identify when we've made it out of the woods against the Hokies?"

We shouldn't exhale until the game goes to zeros but here's what the data reveals. The Hokies are most dangerous in the 2nd and 3rd quarters, but especially in the 2nd quarter. 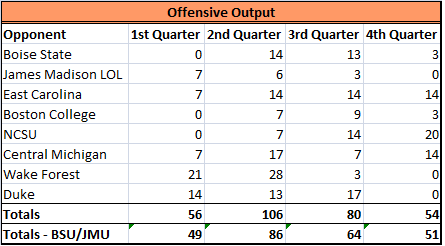 I also wanted to see what the point totals looked like when I took out the Boise State and James Madison games as the Hokies have seemed to have righted the ship starting in Week 3. The 2nd quarter is still the best period of the game for the turkeys.

To clearly understand why the 2nd quarter is so potent, we need to see what opponents are doing by quarter as well. 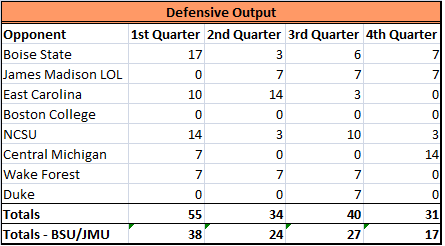 If Georgia Tech wants a chance in this game, the Jackets must reverse the trend of Virginia Tech dominating the middle portion of the game.