Share All sharing options for: Comparing CPJ's Rushing Attack From 2008-2010

A lot of people are probably wondering, "WTF, why can't we win games like 2009?" Perhaps you're also wondering if we've dramatically changed our gameplan or are failing to execute CPJ's offense as well as we did in 2009 or 2008. The first numbers I'd like to throw at you are the carries per game of our feature running positions (QB, B-Back, and A-Back). 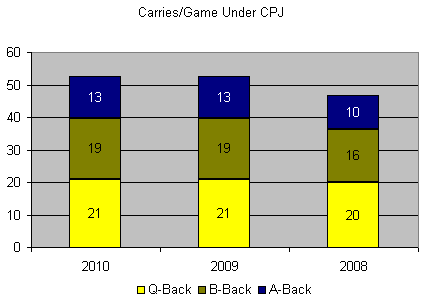 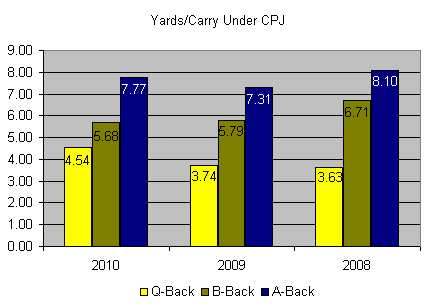 So now I want to go ahead and delve into an issue that gets brought up quite frequently after a loss. It is the idea that certain players or positions are the focus of winning efforts by opposing defenses. If you compared our losing and winning efforts in 2010, you'd see very little difference in production from the positions of the CPJ offense. In 2009, we see huge drop offs in losses.

What this tells me is that we're comfortable with our offense now as wins and losses are almost identical statistically. We're just not catching the breaks we got in 2009 (e.g. increased turnovers, poor field position, and bad special teams). We've lost as many fumbles as we did in 2009 in 29% less games. We've thrown one less interception than we did in 2009 and we still have 2 games plus a bowl game to go (hopefully). We're also punting at a higher frequency with a lower average than 2009. This all adds up to a down year compared to CPJ standards set in 2009.