Reloading vs. Talent Depletion due to the NFL Draft

Share All sharing options for: Reloading vs. Talent Depletion due to the NFL Draft

Since the 2002 college football season (Chan Gailey Era Commencement), there have been nine NFL Drafts. In those nine NFL Drafts, 25 different colleges have had multiple draft picks taken in the first round. 8 SEC schools, 7 ACC schools, 4 Big 12 schools, 3 Big 10 schools, 2 Pac 10 schools, and 1 Big East school. Despite its Pac 10 allegiance, Southern Cal has had the most NFL Drafts since 2003 with multiple draft picks in the first round (4 Drafts). Several schools have had three drafts with multiple first rounders. The highest number of first rounders in a single Draft during that span was 6 players by Miami in 2004.

The NFL Draft is often seen as a sign of a program's ascension into the ranks of college football elite. What a lot of people don't realize is that the NFL Draft often removes irreplaceable talent from college campuses (e.g. Calvin Johnson) and recruiting often never makes up for the departures (ala Miami). By fielding 2 or more NFL first rounders, college football teams have averaged 10 wins or more in the regular season since the 2002 regular season. Forty three different college teams have seen multiple players taken in the first round since that 2003 Draft. Out of those 43 teams, only 14 maintained or improved upon their winning percentage the year after (32% success rate after losing multiple 1st rounders).

I wanted to show all of the data that I pulled up because there is a lot of it and hopefully you'll see a few mistakes I made so I can correct them. Winning percentages for the college team seasons are under each year. Yellow blocks represent regular seasons that fed the NFL Draft 2 or more 1st rounders. Purple blocks mean that teams have been able to average on par or better following a mass exodus to the NFL's 1st round. 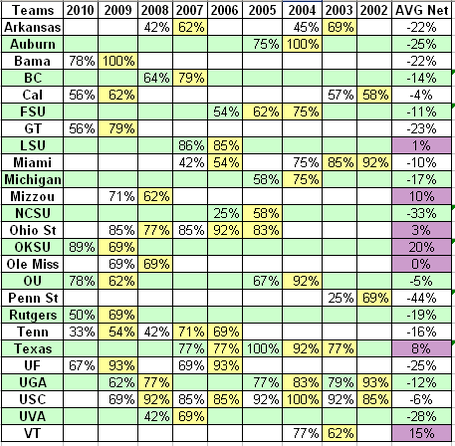 Even if Georgia Tech wins out and goes 9 and 12, we'll still be 9% short of last year's winning percentage. Perhaps we understated our 2009 season's talent vacuum. Any thoughts?