Share All sharing options for: How Georgia Tech deprioritized the forward pass.

In Georgia Tech recent history the team had passed for 50% or greater from 1988 to 2003. This 15 year streak was book ended by Darrell Gast and Rick Strom passing for a combined 47% in 1987 and Reggie Ball's 2004 effort. Prior to our current predicament, we hadn't seen such an epic string of misfires and incompletions since Pepper Rodgers' reign. From 1974-1980, Tech QB's only completed 544 passes of 1135 attempts (47.9% completion percentage).

Now, that we know Tech fans (young and old) are familiar with completion percentages under 50% we can begin our discussion on the recent run of dubious passing. Georgia Tech hasn't passed for 50% since 2003 (Reggie Ball's freshman season). We've seen five different starting quarterbacks play 85 games from 2004 to present. Only 40 of those 85 games saw a QB pass for over 50% completions. Generally speaking, passing at a sub-500 clip is usually a sign of failure. Check out the chart below of teams since 2004 who have passed for less than 50% completions (white dots = non-GT teams, gold dots = average per year, navy dots = GT): 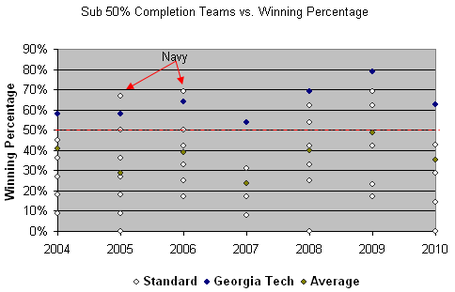 Thirty nine different schools have passed for below 50% completions since 2004. Only a hand full of them have done so twice since 2004. The Washington Huskies were the only team close to Georgia Tech's ridiculous 7 season streak. Washington has accomplished this sub-50 feat 4 times since 2004. Since 2004, only 21 of the 60 sub-50 teams have been bowl eligible (including GT and Navy).

With regards to winning football games when your quarterback is launching mortar rounds 75 degrees above the horizon, Georgia Tech outclasses all of the other sub-50% passing teams. The only sub-50 team that beat us winning percentage-wise since 2004 was Navy under Paul Johnson (2005 and 2006).

In a very concise yet heated discussion with Winfield, we both decided that there had to be a common thread amongst the 2004-2010 seasons. Something that bound 5 different starting quarterbacks and two completely different coaching staffs together. A string theory, if you will.

The first theory Winfield presented was that all of the quarterbacks have been recruits of Chan Gailey. Therefore, they were inherently inaccurate due to affiliation with the "Sloth of Offensive Football." This is definitely an interesting argument. Jaybo was a CPJ recruit and is passing for 53.8% at Georgia Southern and hasn't thrown a pick yet. Taylor Bennett, on the other hand, fled the triple option offense for Louisiana Tech in 2008. He only passed for 39.5% on a team that hadn't seen a sub-50% QB since God knows when. Chan's current Buffalo Bill offense is in the bottom quartile in most passing categories right and I have a feeling he hasn't even begun the ruining of that offense yet.

My theory and probably the least conspiracy theory-ish is that we have had a deep bomb passing offense since 2003. Calvin Johnson made the deep bomb worthwhile from 2004-2006. Taylor Bennett wasn't very good in 2007. And Paul Johnson didn't bring a Texas Tech dump and dink offense to the Flats either (see 2005/2006 Navy above). It's been a sequence of slightly unrelated events fueling this fire of inaccuracy. Ultimately, they are bound by the old gold helmets of the Institute. What do you all think?