Share All sharing options for: I Tried Writing And Telling You About My Wake Forest Experience And This Is What You Got

This is my third draft of "Winfield's Excellent Adventure to Winston-Salem, North Carolina!" but it's not quite working but here are a few things. I wish I had pictures.

First, I love roadtrips. This is my last chance to sweep the football season and this drive re-vitalized me because sometimes a roadtrip is all about the car ride and the anticipation of football victory. I flew to Kansas and rode on a bus to Chapel Hill, not quite the same. Roadtrips are how you meet people you don't know as well and also where you strengthen your friendships.

Second, I guess we tailgated at the wrong area but there were no bathrooms over near our tailgate. Instead I had to walk from the south side to the northeastern side of the tailgate to find a bathroom. Once I left my tailgate, it was dead quiet. Just a lot of empty cars because they all went to the county/city/random fair being held. Note to the readers: When in this situation: don't drink bourbon and ginger, just leave the cup behind because you're suddenly going to be surrounded by happy families with little kids who just want cotton candy. #awkwardmoment

Thirdly, As Bird noted earlier, the attendance was just over 30,000 people. What a depressing crowd. But it makes sense too because Winston-Salem is pretty depressing. It looks like when society went after cigarettes, it also went after Winston-Salem and everything kind of rolled up on top of itself.

Fifthly, I give you this picture to close out my Wake Forest trip. It's a Willy Wonka-esque Demon Deacon. What? 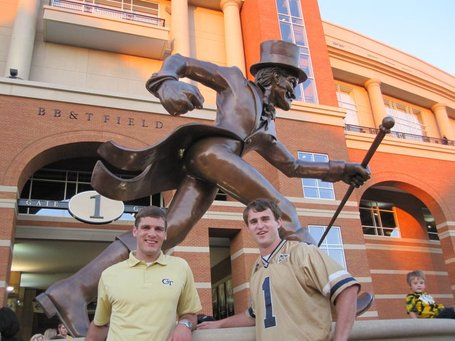