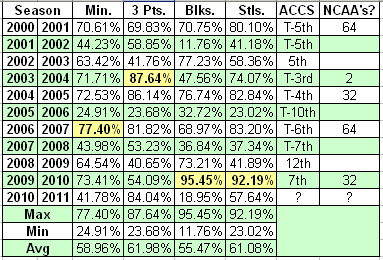 Concerning defensive stats, it's pretty obvious we're not bringing back any of our major blockers (Gani Lawal + Derrick Favors). New guys are gonna have to step up in that department but we're bringing back some pretty good pickpockets. Hopefully, Hewitt has a four guard offense up his sleeve for the 2010-2011 season.