Scoring by Quarter...It's not pretty...

Share All sharing options for: Scoring by Quarter...It's not pretty...

Today, I wanted to point out an awful trend of 2010. We're being outscored in the beginning of football games and being forced to play catch up unlike 2009 where we outscored our opponents in all four quarters. Check out the chart. We've been outscored by 30 points in the first three quarters of our BCS-calibre games:

A simple reason for this is because we're not protecting the football in the first three quarters. Including failed fourth down conversions, Georgia Tech has lost 10 more turnovers in the first three quarters of BCS play than its opponents. In fact, GT has coughed up the football on fumbles, interceptions, and failed fourth down attempts 20 times this season in BCS play. Opponents have only given GT the football 11 times (6 of which were during the fourth quarter). So it only makes sense that we're outscoring opponents in the only quarter that we're not in the red on turnovers. Check out the chart: 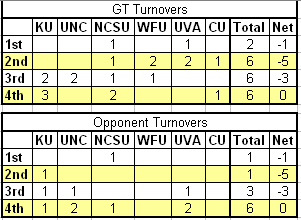 Any thoughts out there in TV Land?