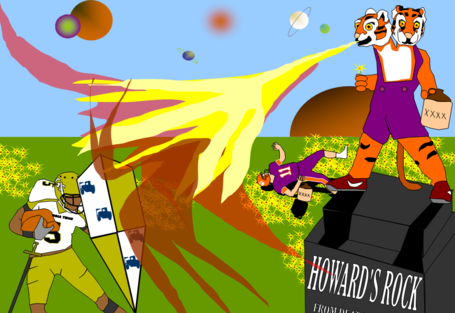 Game 1 of the crucial 3-game stretch begins tomorrow on the road in Death Valley.

The last time Clemson went all purple against Georgia Tech was 2006 during their homecoming. College Gameday came and the Tigers blasted us 31-7. Jon Tenuta looked like a fool, Chan Gailey looked like an idiot, but somehow I still managed to have one of the greatest roadtrips of all time. Clemson fans love the purple and the overalls, might the purple bring out the bad joo-joo for the Jackets? Or can Tech continue to own the Tigers? Here's a quick and dirty preview of what Clemson has been doing this year. I fly back to Atlanta this evening for an early morning drive up to South Carolina tomorrow. Who's with me?!

The Tigers are Purpling-Out and are sick and tired of getting pushed around by Georgia Tech. As I mentioned two days ago, since 2006 the Yellow Jackets have won the past 4 meetings, 3 regular season matchups and 1 ACC Championship Game, by an average of 5.5 points. The two games last year were won by a last possession Scott Blair field goal and it can be argued that Blair also won the game in 2008 as he made two touchdown saving tackles on kickoff.

Why might this year be different than the close victories we've had over the past years?

The answer Tech fans will first come up with is Andre Ellington replacing CJ Spiller. That response is just plain wrong and it won't get you anywhere. Hey, it was my first thought as well, but first glance at the season's stats shows that Ellington is actually producing about a half-yard more than Spiller did per play. So who, or what, else helped Clemson produce last year? Wide Receiver and Special Teams. The Tigers used both CJ Spiller and Jacoby Ford as their return specialists and teams paid the price. In 2009, CJ Spiller returned 23 KO's for an average return of over 30 yards, while Jacoby Ford returned kickoffs for an average of 19. 2010 has resulted in the Tigers' best returner putting up only 20 yards per return. As Bird revealed earlier this week field position is a key issue in football.

Next, let's look at the wide receiver production of Clemson..once again 2009 had better production. Kyle Parker had 7 receivers who put up 10 yards or better per reception. The 2010 squad had a mere three individuals. I'll credit Bud Elliott with the following comment, and it's a valid point. "I see this as a battle between Georgia Tech's new scheme and Clemson's offense [as usual]. Can the Tiger's' inefficient offense exploit our holes like more veteran teams should?" [See NC State].

The matchup of the game is going to be the Georgia Tech defense and the Clemson offense. Kyle Parker has not met his expectations this year and is probably wondering why he didn't leave for baseball. The Jackets must interrupt the timing between Parker and his receivers. Hit him, get a sack or two, and pressure the offense into doing something stupid. Parker will throw those late game interceptions that can lead to a Georgia Tech victory.

Finally, let's talk Tiger defense. Last year in two games, the Jackets ran for 634 yards against the above average defensive squad. ShakinTheSouthland talks Clemson defense against the Triple Option. They have starters returning who felt the bruise of last year...twice. They'll be ready to hit.

An obvious summary but it's the truth: Georgia Tech needs its defense to play 2009-esque ball again. Make a stop (or two) and give the offense a breather from feeling as if it must score every possession because this year has proven that it's not going to happen.

Bird: Clemson sucks and I think Dabo is dumb. 21-13 Jackets.