A Statistical Breakdown of Clemson's D

Share All sharing options for: A Statistical Breakdown of Clemson's D

We already broke down Clemson's defensive performance with respect to field position. Today, I kinda wanted to pick out some interesting points from Clemson's 2010 defensive statistics. The first point is an attempt at figuring out who Clemson's playmakers are on defense. Check out this breakdown of tackles, TFL's, sacks, and INT's from only the starters on Clemson's D:

The first thing that stuck out to me was the high cornerback and safety tackle rate. Georgia Tech fans know what it's like to have a relatively ineffective defensive line but seeing such a high rate of tackles from the secondary is relatively unusual...except for the fact that Dabo has thrown nickel and dime packages at his opponents all season long. His corners and nickel have more tackles individually than both of his outside linebackers.

On the defensive line, there is a lot of supposed depth but statistically Da'Quan Bowers is the force to be reckoned with. He is leading the conference in sacks and tackles for loss. His compatriot on the opposing defensive end spot is Andre Branch. Between the two players is 79% of the teams starting sacks, which tells me we're either facing a conservative non-blitzing defense or an ineffective blitzing defense. Over 65% of the tackles for loss have come from the defensive line. My concern with the Clemson defensive line is that Bowers will force our options to one side of the field or force early, awkward pitches ala NC State.

Linebackers are the weakness of this Clemson D or so I've heard from many Clemson fans. This may be why Dabo is running so many nickel and dime sets. He feels more comfortable with 5 good DB's than 3 average LB's on the field. The problem, however, is that DB's can only do so much to help your running defense. Right now, Clemson's run D is subpar. Against BCS opponents, Clemson is giving up about 4.62 yards per carry. Before Maryland crapped their pants against Clemson, the average was around 5. Check out this distribution of BCS-calibre carries against the Clemson D: 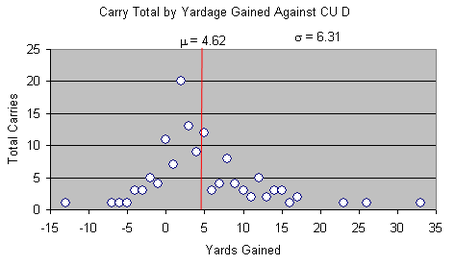 Clemson fans generally agree that the secondary is the backbone of the defense. Struggles of the secondary are generally attributed to poor coaching and coordination rather than lack of talent. The secondary has picked off 7 passes against BCS opponents but has also given up 80 yards in pass interference penalties. In pass plays, opposing offenses are only netting 5.65 yards per play (sacks counted against passing, penalties counted for passing). In fact, opposing BCS QB's have only completed 64 passes out of 140 pass plays (45.7%) against the Tigers.

I think the problem most Tiger fans have is that the completed passes are going for huge chunks of yardage. Around 52% of the completions are for 10 or more yards. The average BCS QB touchdown against the Tigers has been 27 yards long. The Tigers are giving up 3 pass plays of 20 or more yards per BCS opponent. Considering all we throw is long bombs, this sort of bodes well for our offense. Considering we are a fairly inaccurate passing team makes me think we'll still struggle to find completions against the Tigers secondary. Any thoughts out there?