In late September we ran a couple of pieces showing Georgia Tech's offensive and defensive performances with respect to field position. Today, we're gonna compare Georgia Tech offensively to Clemson defensively and see if we can learn anything about Clemson's 2010 defense. The first chart below shows our scoring, punting, and turnover rates based on starting field positions. 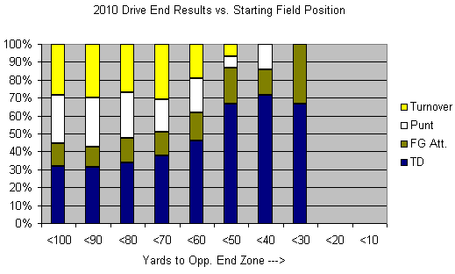 This chart is kinda the frustrating point for me. Last year, Tech had 130 drives by their starting offense and scored 54 offensive touchdowns (41% of the time). This season, we've only scored 26 touchdowns on 81 drives (32% of the time). And it's not like we've settled for more field goal attempts either. We're just turning the ball over at a 77% higher rate per game (including failed 4th downs). That's pretty bad.

Clemson's defense is probably the best defensive unit we've faced considering UNC was still depleted in September. They've forced an ACC leading 46 punts in 6 games and are the second best scoring defense in the conference behind only FSU. So it shouldn't surprise you to see that opponents are having a hard time finding the end zone against Clemson's D. Only 16% of opposing drives have scored TD's against Clemson. We score TD's 32% of the time so something's gotta give. Check out the Clemson D chart: 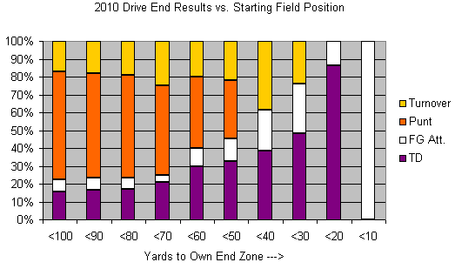 Last year, I felt like our offense had the explosiveness and the execution to combat Clemson in a close dogfight. This season, I think we're gonna need big plays from our defense against a mistake prone Clemson offense in order to win. I don't see Clemson getting burned on deep passes or long runs. Any thoughts?