Crunch Time: The Stretch That Will Define The ACC Football Season

Share All sharing options for: Crunch Time: The Stretch That Will Define The ACC Football Season

Through Middle Tennesee, the Georgia Tech Yellow Jackets sit at 5-2 and are one game away from becoming bowl eligible with Duke still on the schedule. However, bowl eligibility is not good enough for a Paul Johnson football program. We are here to defend the 2009 ACC Championship and three teams stand in our way. These three teams consistently put up good fights and help create good football. These three teams are 2 Coastal Division squads with an Atlantic team thrown in for good measure. These three teams are the Clemson Tigers, the Virginia Tech[sic] Hokies and the Miami Hurricanes. To maintain a presence in the Coastal Division race, Georgia Tech needs to go at least 2-1 during this crucial stretch. These three games will ultimately define the 2010 football season.

when you haven't beaten a team since 2006 like Clemson has you have to begin to wonder when your time comes. As the years continue to pile on, and the opponent continues to squeak by, every year seems like this is your year when you finally grab a victory. This must be how Clemson feels right now. Since that infamous loss in 2006, the Yellow Jackets have won four straight against the Tigers by an average of 5.5 points. I had a conversation with Bird on Sunday about them and how it was a good thing that Clemson beat Maryland like they were supposed to because they don't need any more emotion going into the game against the Jackets.

Though they're coming off  a win many Tiger fans are still standing at the crossroads of the season and scratching their heads wondering what happened, as illustrated by ShakinTheSouthland's Confidence Meter: 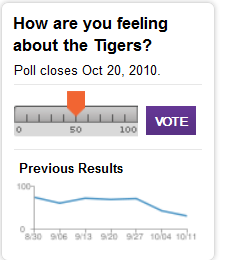 The Tigers have surely circled, and purpled, this game on the calendar. Can Georgia Tech steal another game away in Death Valley?

Through this point in the season, this game is the biggest yet. The game is being held in Blacksburg, VA on a Thursay night, so we know the crowd will be rocking and the opponent will feed off the energy. The Hokies have have righted the ship since their opening week debacles. Amongst common opponents, the Hokies have rocked 'em and socked 'em while we have lost or squeaked by (see North Carolina State and Wake Forest).

Before the season started, Bird and I both said that this game will turn into a loss. Can the Georgia Tech defense continue to improve and work to contain the Virginia Tech offense? With Ryan Williams being out for the past 4 weeks, the Hokies have had to find alternative ways to produce and have succeeded as such. Since their first two games, VT is averaging 41.7 points per game, and allowing only 19.8 points for the opposition.

The 2009 matchup between the two squads was one for the ages. The winner of this game is the eventual Coastal Division champion. Why should this year's round be any different? Every game in the conference counts but if there is a deflate the opposition must-win game, this game is it.

I talked to Joe from TheKeyPlay on Sunday. He's a fan of chaos and this is his belief: VT beats GT. GT beats Miami. Miami beats VT. Utter chaos.

Fortunately for the Jackets, during the toughest stretch of 2010, we have extended rest days and based on our past performances, these days are needed. Are the Miami Hurricanes for real? No one can really say because they've been all over the board. Competent game against Ohio State, blown out by Florida State, solid win against Clemson. The key to Miami will be to pressure Jacory Harris and get him to overthrow and arch his passes. His receivers are too short to catch half his passes but they're quick and our defensive backs are a weak link in our scheme.

Harris is completing exactly 50% of his passes at the moment. But just like every other year Jacory has played in, he declines over the season and as he goes down, so do the Canes. Game-by-game completion rates: FAMU 80%, tOSU 56%, Pitt 65%, Clemson 39%, Florida State 40%, Duke 50%. Enough pressure will get to Harris and the mission can succeed.

Three games. Three crucial games can and will define the ACC season for Georgia Tech. What do you think of this portion of the season?