Who's getting the ball in the clutch?

Share All sharing options for: Who's getting the ball in the clutch?

The first thing I learned while coaching JV football is that you really don't want to distribute the football in moments requiring "clutchness". You want to keep the ball in your sure-handed fellows' hands. In the fourth quarter for Georgia Tech, sure-handedness is what gets you on the field. We've only had one turnover in meaningful fourth quarter play this season (a lost fumble by Orwin Smith). The simple reason behind this is that Anthony Allen and Josh Nesbitt are the only guys getting the football. On average, the quarterback and B-back have gotten 75% of the carries on the season. In the fourth quarter, this number jumps to 84% and that 9% jump is definitely attributable to a reduction in rocket sweeps and A-back option plays in the fourth quarter of play. Check out the break down of 4th quarter rushes in 2010 (Kansas-present): 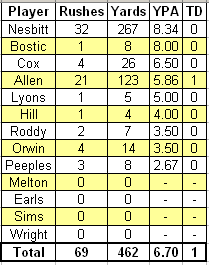 When we transition into the passing game, we see some sad displays of unclutchness. Nesbitt's overall 40% completion percentage increases by two percentage points in the fourth quarter, which ain't too great. When you consider that his three main receivers, Corey Earls, Stephen Hill, and Tyler Melton, have only caught 38% of the passes thrown their way in the fourth quarter it makes more sense. Check out the breakdown of fourth quarter receptions: 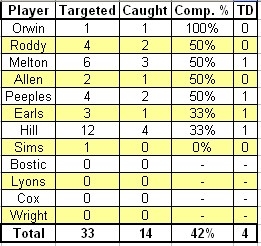 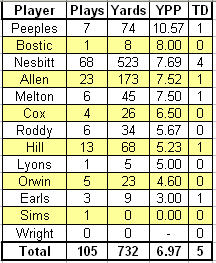 Any thoughts out there? Did any of the stats surprise you? Any questions?