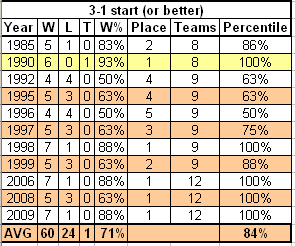 Now, check out seasons where GT started 2-2 or worse in conference play: 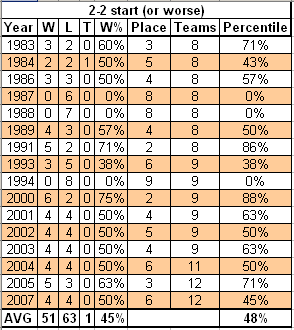 I definitely don't mind being lumped in with the 3-1 or better conference starts (even if it includes a Bill Lewis year). And for even more historical comparisons, George O'Leary had a 36-20 (64%) all time record against conference opponents. Chan Gailey had a 28-20 (58%) all time record against ACC schools. And CPJ has a 15-5 (75%) record in conference play. Only 7 ACC head coaches all time are on par with CPJ's winning percentage. Can you guess them?