Share All sharing options for: College Conference Comparison in the NFL playoffs

To me, the best sports television is the NFL playoffs. It has an incredibly competitive field of teams, it's a brief and exciting sequence of games, and it culminates in the most popular single sporting event in the world. There are no polls. There isn't a 65 day layoff between the last game of the season and the actual championship. Teams are always playing for something important.

I mentioned a few weeks ago that the ACC has had more defensive draft picks and pro bowlers (from those picks) than the Big 10 since full expansion in 2005. A lot of commenters were upset in that it was a relatively small sample size. Some criticized the use of the NFL Draft because it includes teams with terrible talent evaluation like the Rams, Raiders, or whatnot. So I waited until all of the playoff teams were set and went through their starting lineups similar to what I did with last year's NBA playoffs.

I broke the depth charts down by college and conference affiliation for all 12 playoff teams. That includes 132 offensive and 132 defensive players. The only personal addition I made was adding Wes Welker since New England hasn't replaced him in the starting depth chart yet. I wanted a round number of 132 offensive dudes.

Around 73% of all the NFL playoff team starters are from BCS conference teams. The most represented conference was the SEC with 47 total starters going into the 2010 NFL playoffs. The most represented team was Southern Cal with 11 players starting on NFL playoff teams (including two quarterbacks), which is pretty remarkable. The first breakdown I did was with relation to conference. The offensive chart includes total starters, offensive linemen, skill position players, and QB's. The defensive chart includes total starters, defensive linemen, linebackers, and defensive backs. 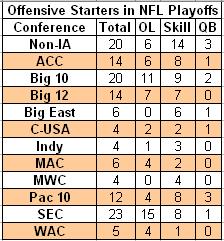 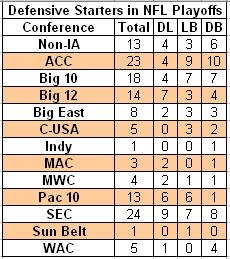 The Non-I-A category includes all I-AA and lower institutions, which is why it seems a little high. There are over 500 teams in Division I-AA, II, and III football (not including NAIA football) so there's a lot of talent to pull from as far as skill positions are concerned. The defensive and offensive line are where you really see the big drop off for the little guys.

Looking at individual institutions is fun as well. GT actually performed favorably in the defensive list. We have 5 alumni that will be starting either this weekend or next weekend after the bye including Philip Wheeler, JP Foschi, Dawan Landry, Keith Brooking, and Gary Guyton. I had to truncate the lists to the top schools with 3 or more offensive starters and 4 or more defensive starters. The reason was because there were 61 different I-A schools with offensive alumni and 58 different I-A schools with defensive alumni. A nice diverse group. 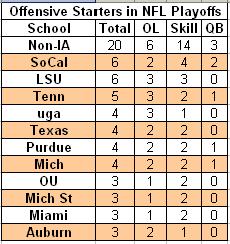 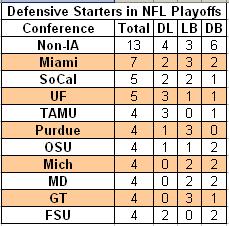 I know I included Miami players from their Big East years but now-a-days when someone says Miami, they say, "Miami - the ACC team," not "Miami - formerly of the Big East." Players that throw up Da U on NFL broadcasts are encouraging kids to play in the ACC now not the Big East. So that's why I felt like putting Miami alumni into the ACC was justifiable. Same goes for BC while VT didn't have any alum listed as NFL playoff team starters.