What's in a Hewitt Point Guard

Share All sharing options for: What's in a Hewitt Point Guard

I think most people consider Jarrett Jack the definition of a Paul Hewitt point guard. He had size, strength, and intelligence. Over the course of his three year career, he started in every single game except 2005's senior night (100 career starts) and his team won 64 of the games he played in. Jack was drafted 22nd overall by Denver and traded to Portland. He now is seeing significant playing time for the Toronto Raptors alongside old GT teammate Chris Bosh.

Now, what was it that made Jarrett Jack so great to Tech fans? I think the most obvious attribute was his strength and rebounding ability. He pulled down so many loose balls because he was bigger and stronger than most ACC guards. He also had enough power to drive through the lane and either take the shot or dish out to a waiting 3-baller named B.J. Elder or Marvin Lewis. Below is a table of the top 2 point guards per year since the Final Four season. They are sorted by Points per Minute (navy bars). The gold bar represents their rebounds/min. 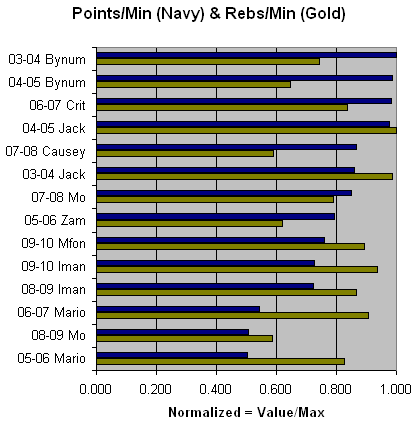 Another interesting fact presented in this chart is that Will Bynum and Jack account for 4 of the top 6 scoring efficiencies when they were on the floor (scoring well over a point every 2.5 minutes). And the other 2 in the top 6 are single year guards, Javaris Crittenton and Matt Causey. In case you didn't notice, there has been a considerable drop off concerning our point guards' scoring abilities and frequency since the departure of Jack and Bynum.

The next chart is a listing of all the aforementioned guards' assist:turnover ratios. When you look at Jack's Final Four year, you can easily see how he became an Atlantan household name. Iman, this season, is not doing too shabby either. 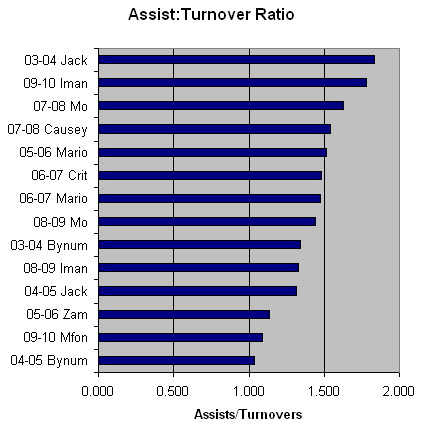 Mfon's A:T is lower than Zam (the benchmark for disaster), which I find interesting. He's been asked to slash into the lane a lot but the relatively low A:T ratio is kinda disturbing. We'll keep an eye on that stat throughout Mfon's career.

The final table is just an overview of who Hewitt is giving the rock to. Who did he give the green light to take shots? Who did he keep on the floor because of necessity or because of trust? So it's a chart of minutes per game and shots per game. When it's sorted by shots per game, there aren't really any surprises, to me. 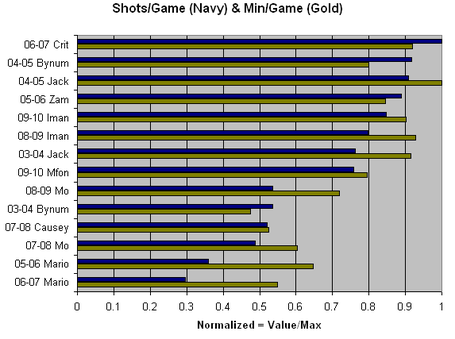 Any additional thoughts? Anyone wanna see any other PG statistics?