Comparing the Diesel to Deuce

Share All sharing options for: Comparing the Diesel to Deuce

Niners Nation, a San Fransisco 49ers blog, has been running a top 100 pro prospects series in build up to the 2010 Draft. Yesterday, they featured Jonathan Dwyer as #9 out of 100 players and projected him as the second running back taken in the Draft. I tend to agree with most of their assessment, which is rich with praise for our favorite B-back.

One or two comparisons were made to former Tech star Tashard Choice in the comments section so I figured I'd pull some numbers to see how comparable the two were throughout their careers. Outsiders keep in mind that Tashard was in Pat Nix (2005-2006) and John Bond's (2007) pro style offenses versus Dwyer was in Bond's (2007) and Paul Johnson's (2008-2009). The big formation and philosophical differences result in Dwyer being almost exclusively a rushing back while Deuce was asked to catch a lot of screens, pass block, and run behind the great fullback Mike Cox while J-Diesel has no blocking back in the flexbone and pass blocks a lot less frequently than TC had to. 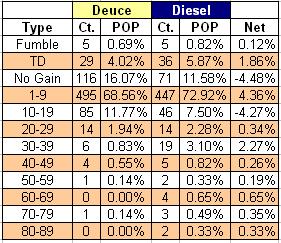 The first chart lays out Dwyer and Tashard's offensive plays (rushes + passes + receptions) based upon yardage gained. Generally speaking, Dwyer beats Tashard in every category even though he only caught 15 passes in his entire career versus Choice caught 40. Choice's trademark was never fumbling and he edged out Dwyer by little bit over a 10th of a percent. Dwyer's big play ability is highlighted in this chart as once he got past the first tier, he was gone.

This chart is a little bit different. This chart shows percentage of plays that kept the offense on track to achieve a first down (4 yards or greater) and the percentage of plays that resulted in a 1st down or TD. Once again, this kinda highlights the philosophical difference between a Nix/Bond offense and a Johnson offense. Choice got to run behind tight ends and fullbacks while Dwyer was expected to trust that there would be a hole when he met the QB at the meshpoint. Secondly, Johnson's favorite play call on Nth and inches was quarterback dive not the typical halfback iso you would see from John Bond or Patrick Nix.

Critics of CPJ's system say that the offense will get bottled up now that opponents have seen it a couple times and have some shape or form of a blueprint to stop it. Dwyer's stats from 2008-2009 indicate that he didn't have quite as many big plays in 2009 but he still managed to decrease his carries for no gain and increase his carries for 4 yards or more. Those two stats indicate to me that the offensive line adjusted better to CPJ's system in the second year allowing Dwyer to make it past the LOS more often than not before first contact. 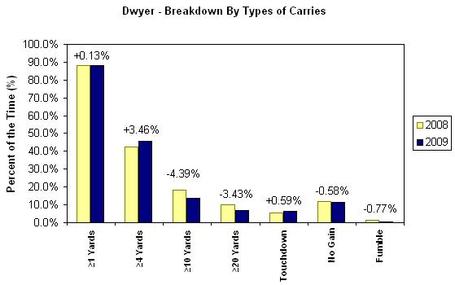 I do think we did see some adjustments by opposing defenses in year two of CPJ's offense. It seemed like secondaries were in better position in 2009 limiting our big plays in the dive (they had no effect on short yardage but rather the big plays).