Gani Lawal's and Zach Peacock's development over the years

Share All sharing options for: Gani Lawal's and Zach Peacock's development over the years

One of the biggest forces this year during basketball season has seemed to be Gani Lawal and Zach Peacock. We all expected to see Gani work his magic this year but who really knew what to think about Zach coming into the season? Would you ever have believed that I, a Hewitt doubter, would say that we've had players develop positively over the past few seasons?

In typical Bird fashion, I had to check the numbers to see if my thoughts were validated. I specifically wanted to see 2008/2009 numbers compared to 2009/2010 numbers because the play by both Lawal and Peacock are sticking in my mind this season. I took a look at yearly points scored, free throw percentage and rebounds for both players. I also checked out minutes played, but we must remember that Derrick Favors took Peacock’s starting role this year so I expected some fluctuation. For the 2009-2010 year, I projected out yearly totals so those numbers should be interpreted with some discernment.

Total points in a year 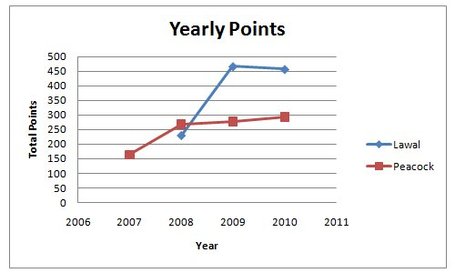 Gani's shot up in his 2nd year (2008-2009), while Peacock has steadily gotten better (development?). An interesting thing to note (and you will soon see a trend in this) is how Gani is slightly under his yearly numbers from last year at this point. Who would have believed that? 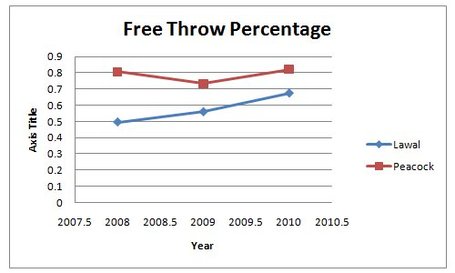 Both Zach and Gani struggled at the line their freshman year but both have improved rather well. Zach is now up to an 82% shooter and Gani, oh Gani, is now up to 67.5%. Still pretty low, but moving upward... 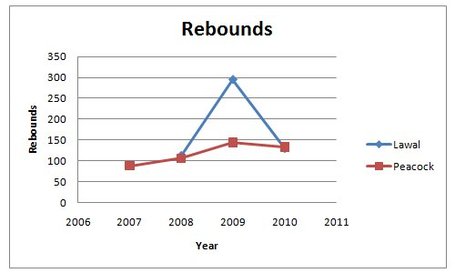 This graph illustrates Gani coming into his own last year. 294 freaking rebounds in 2008-2009! Zach is more or less right at where he was last year. 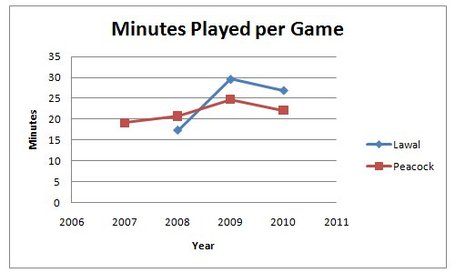 It makes sense to see Zach's numbers go down because of the playing time Derrick Favors has received. Lawal's minutes have decreased because we no longer need or depend on him to carry the team. Him running into late foul trouble would also decrease his minutes this year.

Development? Maybe so after all. These charts also reveal that Zach Peacock has become our 6th Man, the dependable non-starter who handles the minutes and knows his role and contributes in areas where others cannot (FREE THROWS!)

Thoughts? Were these graphs just dumb? Let me hear your thoughts.