Share All sharing options for: Hewitt Era by the Numbers Part II

We looked at mostly regular season information yesterday. Today, I wanna look at post season stats. If you dislike or approve of Hewitt, you may understand why he's still our coach when you compare his postseason numbers to other ACC coaches: 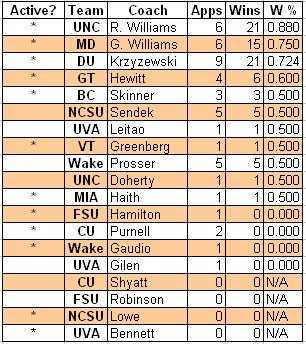 All of the numbers above are ACC coaches' NCAA tournament appearances strictly from the Paul Hewitt Era (2001-2009 post seasons). As your eyes track down the list, you kinda notice that the density of guys without ACC jobs increases. I've also found over the past couple days that NC State fans were either insane or incompetent to get rid of Herb and then replace him with Sidney Lowe. It's probably the second biggest blunder in NC State history behind giving the Chest a head coaching job. 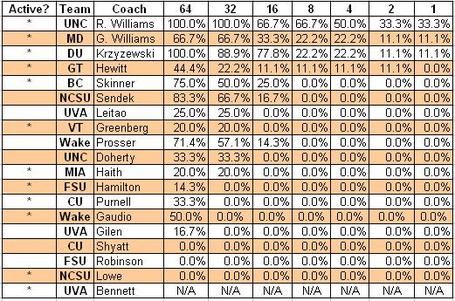 Now, this chart is kinda where pro-Hewitt guys can load their cannons and return fire on the anti-Hewitt dudes. It shows what percentage of the time a coach takes his team to the level indicated (e.g. Roy Williams makes the tournament 100% of the time and wins the National Title 1/3 of the time). Hewitt is one of four ACC coaches in the last nine post seasons to take a team to the Final Four. The others are obviously Coaches K, Roy, and Gary. The fact that no one else has even mustered an Elite 8 out of the other 14 eligible coaches is actually quite mind boggling. There was a lot of talent in the ACC throughout the 2000's and no one made a Final Four run outside of Hewitt and the aforementioned three. Interesting. This is why Paul's Final Four run still holds some weight to the somewhat dwindling Paul Hewitt Nation. 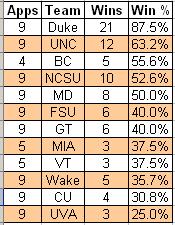