Hewitt Era by the Numbers

Share All sharing options for: Hewitt Era by the Numbers

A lot of people get angry with me for my undying support of the Hoops Coach, Paul Hewitt. I think you all need to understand that the tone for my GT fandom was set during my freshman year - the 2004 Final Four (and Reggie Ball's freshman year). Our team was an exciting, transition offense with an incredibly deep and balanced lineup. Every player had a distinct look and style of play, which made our team incredibly appealing to me. I grew up during the MJ/Dominique/Ewing/etc. NBA era where teams had specialists, star power, and exciting offenses. In short, the 2004 team shaped my generally positive outlook on Hewitt's hoops squad. So... maybe I'm a little more patient than the average Tech fan just because my preseason expectation ceiling for Hewitt is always brightened by the hope of reliving 2004 again.

Alright, enough reminiscing. Here's the skinny. I went though all of Hewitt's ACC seasons and broke down his record against other coaches, in certain stadiums, and other details. First off, here's a chart displaying the ACC Coaching Eras that Hewitt has endured:

There have been seven head coaching changes since Hewitt's tenure, which also includes the ACC expansion. Hewitt was 30-32 against guys that are no longer coaching in the ACC. The most abysmal showings were always against Matt Doherty's UNC squad (5-2 against Hewitt) and Herb Sendek's Princeton offense (9-4 against Hewitt). Below is a chart of current and former ACC coaches' records against Hewitt: 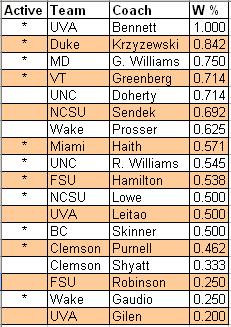 I guess what angers Tech fans the most is Hewitt's overall record in ACC play of 67-96. He's only got a winning record against FSU, Clemson, and UVA since the start of the 2000-2001 season. Essentially, he's only competing with the bottom third of the conference year in year out. You could factor in our victory over BC in the 2004 tournament but that's not really ACC play. 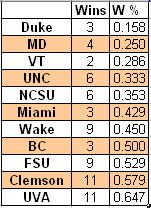 When we break down the wins/losses into where the games were played and against who, we can kinda see more detail. First off, Hewitt is actually pretty good at home sporting a 43-31 ACC home record. He's won 6 of 15 ACC Tournament games. Factor in the fact that he's had to play Duke or UNC 6 times in those ACCT games and I'd say Hewitt has fared better in the ACCT than in regular season play. He seems to relish short layover in his game preparation, which plays into his coaching style. 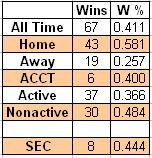 I think the fact that peeves a lot of Tech fans and myself is the losing record against SEC squads. 8 wins, 10 losses. 4-6 against Georgie. NBA draft picks since Hewitt's been at Tech: GT 5, Georgie 2. I don't understand the Stegeman curse. Georgie is a garbage pre-ACC season team that should be a W every season. Doesn't make sense with the teams and talent Hewitt has had lined up against Georgie's Island of Misfit Toys. This is one of my top 3 complaints against Hewitt. Winning instate is IMPORTANT. It matters to recruiting. It matters to the fans. And that all leads to long term sustainability of the program. 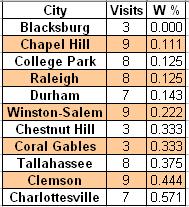 The graph above is a testament to how difficult it is to win on the road in the ACC and how huge the UVA loss was. The Cavaliers have really sucked against us in Charlottesville and not winning there could really hurt us later on in the season.

Let me know your thoughts and/or complaints. Any questions or statistics you'd like to see?