As promised yesterday we're gonna do a quick profile of B.J. Bostic.  Bostic is a QB/CB prospect out of Jefferson high school in Louisville, GA.  He's listed at 5'11" and 175 lbs, though I've seen him several times in person, and I'd put him closer to 5'9".  B.J. is an interesting prospect  because he played quarterback all throughout high school but will most likely begin his college career on the Flats on defense as a corner back.  An interesting fact about B.J. is that is his cousin Chris Crenshaw was a member of the 2009 recruiting class and redshirted this past season as a defensive end.  Georgia Tech: Where FAMILY happens (sorry, I couldn't resist). 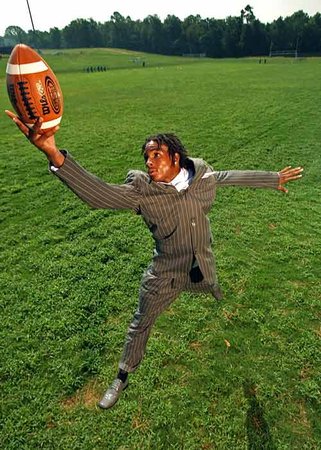 I freaking love this picture.  If B.J. wants to wear a suit as a uniform, I say we let him do it.  Just my opinion though.

B.J. truly is a freakish athlete.  His 40 time is listed as 4.55, but that really doesn't tell the whole story.  I've talked before about Paul Johnson seeking recruits who can play fast in pads, and B.J. is another recruit that fits that mold.  Check out this highlight video from a game during his Junior season against Toombs high (I apologize for the poor quality of the video, but it was one of the few publicly available clips I could find)

The one drawback with B.J. is that he never played a live snap on defense until the O-D All-American game a few weeks back.  He has worked on his corner back techniques at various camps and occasionally during practice, but overall he's completely raw on the defensive side of the ball.  As mentioned yesterday, he is one of the 3 early enrollees in this class, so that will give him some extra time to work on his ball skills.  However, I still predict that B.J. will have to redshirt the 2010 season; both to work on his defense and add some weight to his frame.  No matter what though, there is a bright future ahead for B.J.  Also, with that kind of athleticism, don't be surprised if B.J. gets some snaps at A-back or even QB at some point during his time at Tech.

One other thing about B.J. that I want to touch on is his character.  The guy gives some great interviews and is always very engaging.  Take a look at this video of him announcing his commitment to Georgia Tech last spring as well as this interview with the AJC from last November.

I love hearing him run off the names of all the other schools he considered and then watching him put that GT hat on!  B.J. was the 4th commit for the 2010 class and has remained solid as a rock throughout the recruiting process despite receiving offers from several other schools to play QB or the "Wildcat" position.  He is a great addition to the Tech Football Program and will represent the Institute very well over the next 4-5 years.