ACC reppin' it in the Pro Bowl

Share All sharing options for: ACC reppin' it in the Pro Bowl

I already compared conference affiliations in the NFL playoff starting rotations. Now, since the NFL has selected eighty players to play in the 2010 NFL Pro Bowl, I have broken down the college conference affiliations again. And guess what? The ACC took the gold medal with 17 players selected for the 2010 NFL Pro Bowl. Sure, we cheated as 8 of the players were from the U but hey that's part of the deal with conference realignments. If we get the inconsistent play of the modern U, we also get to claim the NFL legacy of the old U. Here's a quick run down of how the BCS conferences turned out: 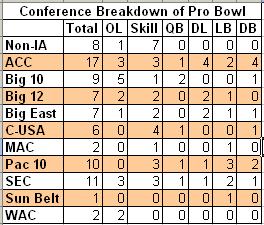 The non-BCS conferences accounted for 11 Pro Bowlers while divisions below I-A football accounted for 8 Pro Bowlers. No individual college is close to Miami's 8 reps while Michigan is second with 4. And yes the Big 10 fans are happy knowing they have the most pro bowl OL at 5.

If SEC fans are slightly upset that they don't have the most talent in the 2010 Pro Bowl, they can be reassured that their conference institutions were the most represented as 8 of their member schools sent players to Pro Bowlers (the highest percentage of representation). The ACC was fourth in this ranking with 7 out of 12 teams sending guys to the Pro Bowl (the Big East had 5 schools repped and the Pac 10 had 6).