2010 Football Recruits: The Georgia Top 50 and Other Ramblings

Share All sharing options for: 2010 Football Recruits: The Georgia Top 50 and Other Ramblings

It's been quite awhile since we've given y'all a recruiting update, and for that I apologize.  Between the trip to the Orange Bowl and getting ready to move/start a job I haven't had much time to write.  I know y'all have missed recruiting updates dearly so here we go.

But first, it should be known that I'm writing this while I re-watch the Orange Bowl for the first time.  Quick thought: the first drive of the 2nd half was a thing of beauty... The false start on 3rd and 4 with about 8 minutes to go in the 3rd on their 20 yard line or so absolutely kills us.  We had the toss sweep setup perfectly to Embry.  Instead we get third and nine and only gain about 4 yards then Blair misses the field goal attempt.  Sorry to depress you, but it's tough not to think what could have been if we don't get that penalty right there.  And the TD drive was just fantastic.  I'm sitting here thinking "Where the hell was this offense in the first half?"  And I'm also thinking, "How do we lose this game after a drive like that?"  This game was well within our reach, we just didn't execute well enough throughout the game.

Anyway, I could break down this game forever, but that would depress you and since most of you are reading this at work your boss might ask you why the hell you're so depressed, but you won't be able to admit the true reason for your depression because it was caused by reading my blog post when you weren't supposed to be reading it so you'll have to lie to your boss and that could set off a terrible chain of events ending with you losing your job.  So with that being said, on to some recruiting news (this will put you in a good mood I promise).

The AJC just released the Georgia Top 50 Football Prospects for 2010 on Friday, January 8th.  Georgia Tech was represented very well on this list with 9 verbal commitments rated among the top 50 players in the state, including 2 in the top 10.  Considering the small size of this class (only 13 commits to this point), having 9 of the top 50 players in your home state is getting the job done if you ask me.  Here are the players appearing on the Top 50 list:

One quick note, Charles Perkins is the top-rated RB in the state according to this list and placed ahead of much-ballyhooed Florida commit Mack Brown.  I thought Paul Johnson wouldn't be able to get top-level talent to run his system?  What gives?  Anyway, 3 of our commits are enrolling early and beginning classes this week: Charles Perkins, BJ Bostic and Isiah Johnson.  This is a huge bonus for us and these young men as well.  They'll have a chance to bulk up in the weight room and go through spring practice before the other members of their class get there.  Here's a picture of one of the newest Tech Men, Charles Perkins. 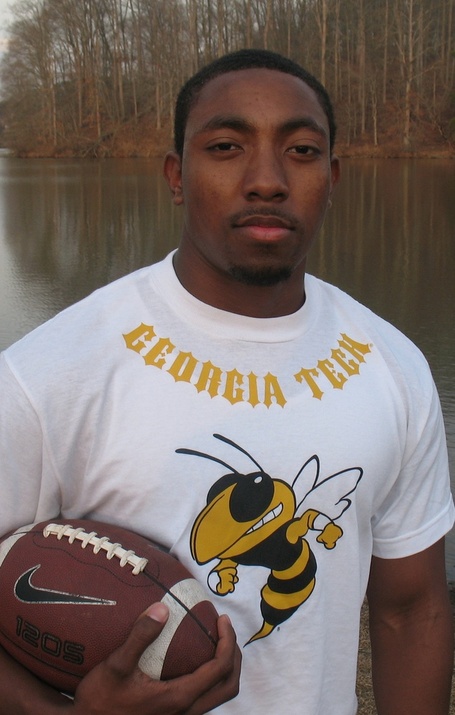 Yes everyone, he really is that awesome.  Welcome to The Flats Charles and all the 2010 commits!  We'll be publishing a profile of 2010 commit B.J. Bostic tomorrow.