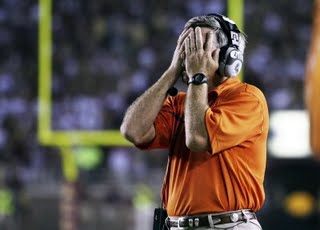 First, let us all remember Clemson has not scored a touchdown on Grant Field since 2003. I would like to continue that defensive success. Dane wants the game to be exciting and close. I just wanna blow Clemson out.

Second, I will have to listen to the game via FM local radio because I've gotta coach JV Thursday night. Clemson fans, please tell your color guy and play-by-play guy to keep it fair and unbiased because Tech fans are being forced to listen to them. Now, the preview.

Stat Stuff
If we're basing all of our assumptions purely on the numbers, then Clemson is incredibly reliant on CJ Spiller's presence in the backfield. The MTSU rushing effort was 80 yards short of the 2008 Clemson rushing average.

Defensively, the Tigers gave up ~290 yards to a team that averaged 340 yards of offense last season. MTSU was a pass first team in 2008 and Clemson cut back MTSU's 2008 passing average by 50 yards for the start of 2009. MTSU's QB had his first start in the hostile Clemson Temple of Doom or Purple Paradise or whatever they want to call it. Seriously, MTSU's QB threw two picks in his first three possessions. However, MTSU's QB was not the only QB to have a terrible day.

Children of the Korn
Willy Korn should ride the bench against GT. If Dabo brings him in, then he's a braver man than me. Willy Korn played 4 snaps. He handed the ball off to Harper. Next play he was sacked, fumbled, and the ball was returned for a TD. Next series Korn handed off to Harper and followed that play with a pick. Two turnovers in four plays. The Willy Korn Era is officially over.

Crusty Seniors on D
The average year of the Clemson starting defense is 3.45 or somewhere slightly below a senior but above a junior. That's impressive and something that a lot of ACC pundits didn't really mention in the preseason when all the chest-thumping was going on at FSU and VT. Expect the veteran defense to make some plays for Clemson this year. Don't expect GT to run all day on Clemson. We're gonna need big plays in one on one situations to win against Clemson because the veteran Clemson D has seen GT 3-4 times already and understands the importance of the Battle for I-85.

Weaknesses
Apparent weaknesses for the 2009 Clemson team appear to be in their offensive passing game and lack of steady running attack when Spiller is out. Kyle Parker played the entirety of the game (minus Korn's epic fail), was below 50% passing, and threw for only 159 yards against a team that was bad at defending the pass in the Sun Belt...

GT's defensive strengths and weaknesses will be aided by Clemson's weaknesses. GT's strong pass rush by Derrick Morgan is sure to disrupt Parker's game. If Clemson doesn't get Spiller and the other backs going at a consistent clip, I don't see Clemson scoring enough to last against Tech. GT's secondary should be more than capable of handling the Clemson receiving corps of Jacoby Ford (plus guest).

Look for Clemson to run a lot of heavy set formations with multiple tight ends, fullbacks, etc.. Dabo feels like the run game will be their bread and butter so he will force GT to defend against the biggest lineups possible in hopes that bumbling second string tight ends = big plays in the run game.

And then finally for good measure: