How we voted - Blogpoll Week 1

Share All sharing options for: How we voted - Blogpoll Week 1

Here is the breakdown of how we voted for each team in our composite blogpoll, which factors in all three of our ballots along with the standard deviation amongst the ballots to determine tie breakers. This week there were no super tie breakers (utilization of DFJ's opinion) within the Top 25. 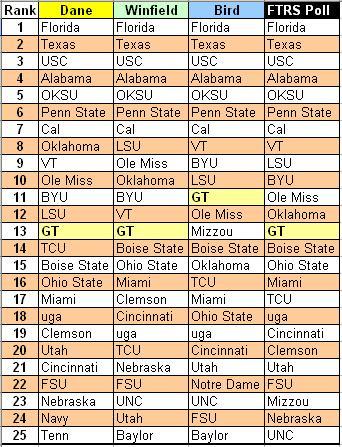 Bird: I just chopped up the poll and completely redid it based on team's performances this weekend (and possible performances for noncombatants). I don't think OU will do anything without Bradford and I don't think he'll be back to 100% for the rest of the season. Separated shoulders are a big deal especially in QB's. Don't let the sports media fool you. I think Missouri is going to surprise a lot of people. Illinois is a damn good team (as I have a lot of respect for the Zooker) and the stomping Mizzou put on 'em is worthy of mention.

Notre Dame is in the top 25 because offensively they are good enough to be in the Top 25. Defensively they will not crack the top 10 this year but their offense will be good enough to win games for Weis. uga will drop from my ballot if they lose to South Carolina this weekend (a high probability). I also think Cincinnati will be the best team in Ohio by season's end. If they met and crushed Ohio State in the Orange Bowl, that'd be amazing.

Good/Bad picks for the others: I think we all overrated Cal. Trusting in Maryland is bad. Trusting in teams that beat Maryland is bad (e.g. MTSU last year). Navy is top 25 coaching and Tennessee is Top 25 talent. Neither deserve more credit than that, Dane.

Pick I will regret the most: Miami at 17. Watch 'em fall like a rock when they play GT. AHAHAAA!!!

Dane: I broke it down real tight right thur yesterday, but let me explain some of my changes. uga got bumped up because I really think OKSU is that good, and while they lack the punch of teams past they will definitely see their fair share of wins this season. It's hard to tell just how many yet, but I am more willing to bet that they will have a pretty decent season rather than go ahead and claim that Clemson (who I think is the team to beat in the Atlantic) is a better team. Also, I couldn't bring myself to put a 0-1 FSU team over Utah and Cincy.

Funny enough, the two picks I said I was going to regret reared their ugly head this weekend. Cincinnati really stepped up as a Big East favorite, and Oregon blew it as hard as a team possibly can. I've swapped WVU and the Bearcats, and dropped Oregon. Yes, it was that bad.

Good Picks for the others: Winfield acknowledging Cal - Bird had already done so. John and Winfield both did a good job of recognizing the scariness of Miami.

Bad Picks for the others: Bird for picking Mizzou without explaining himself (please delete this if you do, John), and for picking Notre Dame. Crushing the team with one of the crappiest defenses (especially pass defenses) in the nation last year does not get you ranked, especially when we hate you. Winfield gets a finger wag for putting TCU in the 20's, which I can let slide seeing as they haven't played yet. Both of them get no-no's for ranking UNC, who showed that Yates really does suck, and who had to barrel over Citadel by running because they couldn't get their passing game off the ground. Their passing game was partly why they were so damn lucky last year, and with that gone, UNC is going to tank this season.

Pick I will regret the most: Well, I don't know how much I regret it, but when things shake out BYU will not be #11. I don't mind ranking them based on their play the other night, but please recognize that if I think other teams are playing better, I will bump them. Oh, and Nebraska. Ew.

Winfield: The two biggest teams that jumped up in my poll were both Cal and BYU. The Golden Bears moved up because of how they manhandled the Terrapins 48-3 and I have to acknowledge power like that. BYU moves up because they took out Sam Bradford and then took out Oklahoma. Will they cruise into the BCS?! The biggest losers in my mind this past week is obviously Oregon, who drops completely out. When you see a team like they did tank so bad, and then you add that with the complete lack of respect for the coach, that equals bad things. So long Ducks. TCU actually dropped in my ballot which is because of the lack of play but you can't really do anything with a team that sits idle. Miami more or less switches with FSU as well.

Smart picks by Bird and Dane: Dane's got mid-major love and puts Boise, BYU and TCU in very respectable positions. Bird drops Oklahoma out of the top-10 which is probably where they should be without Sam Bradford anyways.

Dumb picks by Bird and Dane: Dane giving Navy and Tennessee votes. Beating Western Kentucky (who has been out of 1-AA for what? 2 years?) should not get the push for a top-25 vote. Giving Navy a vote is more out of sympathy. Bird gives too much respect to Notre Dame and Missouri. The Tigers are battling for 4th place in the Big-12 and the Fighting Irish still have not shown anything.