First, let me say that as a football fan that follows I-AA, I'm tired of hearing all of the lambasting on national TV/radio about playing I-AA teams. Here's why: 1) It's difficult to schedule I-A teams at the last minute (e.g. Army backing out last year). 2) I-A teams ask for twice the payout and need the money less than I-AA programs. Payouts for I-AA games pays for a lot of stuff when talking about programs with relatively minuscule budgets. 3) Good I-AA teams can beat crappy I-A teams (e.g. Villanova, William & Mary, and Richmond defeating I-A's this season already). 4) I-AA fans like seeing their team play the big instate schools and having the chance at upsets (e.g. N. Iowa, Appy State). Ohio State should always try to keep its money instate with Youngstown State as I hope GT will help out the GSU's in the future under CPJ. 5) The notion that I-AA's are getting beaten up or hurt or stymied before their seasons' start is bunk. Appy State lost to Kansas and NC State in years they won the National Title. James Madison lost to WVU the year they won. I-A teams provide a quick buck and huge challenge for I-AA teams. Players will inevitably get injured no matter who their opponent.

There is typically a huge athletic/coaching talent disparity but protecting I-AA athletes from embarrassment/injury is stupid. Let schools schedule whoever they want. If the fans want to see their team, they will pay to see them no matter the opponent. The only repercussion should be post-season considerations when considering National Title contenders (e.g. Auburn for dropping Tech and picking up Citadel in 2004).

Now that I've finished my rant, here's the breakdown of basic stats from this year's version of the JSU game versus last year's: 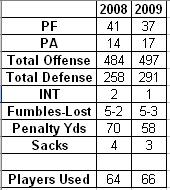 Stats-wise we didn't play as well as last year defensively but honestly I thought our starting secondary played outstanding football and most of JSU's yardage came in garbage time. I am more confident in the Butler/Tarrant duo than I've ever been with any other group of cornerbacks going into the season. Butler had some sick plays down field in one on one situations.

Offensively, how can you argue with scoring on the first play of the game. One touchdown per 18 seconds or as Vu commented, "We were on pace to score 1,400 points." Sadly, Spiller scored on the opening kickoff meaning Clemson was on pace to score 1,800 points. Block-C may be allowed to predict a 400 point victory.

Finally, here are some WTF's for the weekend:

1. Duke and Richmond(edit) Virginia should be annexed from the ACC.
2. Ponder and Harris are probably the best QB's in the ACC. We all saw Ponder's ability last year but who woulda thought Shannon would pull Harris out of the gutter like he has.
3. Russell Wilson = overrated. His stats were inflated by the conservative play calling of Tom O.
4. Jon Dwyer, CJ Spiller, and Dez Bryant should be front runners for the Heisman. I didn't see any QB play worthy of the Heisman this year.
5. Georgia Tech's schedule got harder and easier after watching several games this year. Virginia should be 100% win. Forget any of my preseason predictions. Miami will be tough as Hell and UNC may struggle breaking in their new O line and receiving corps.