Edit: Oops, jumped the gun. They need to move those draft and publish buttons farther away from each other.

So here's a quick rundown of our blog poll rough draft: 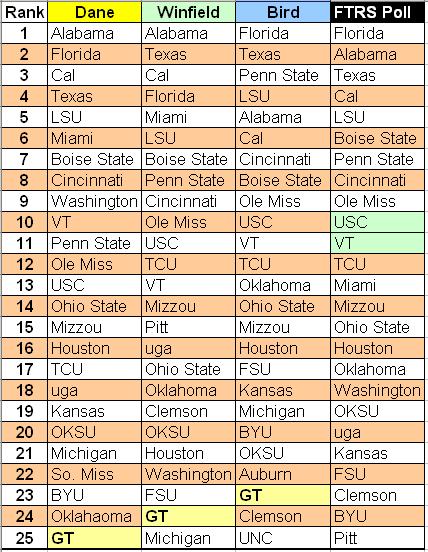 Bird: I guess I'm like the rest of the country and I wanna see the Top 25 team that is supposed to be at GT before I rank them any higher. You may have noticed that Winfield's ridiculously high ranking of Pitt booted GT from our poll despite GT being ranked by all three of us. I'm sticking with my "You beat 'em, you're ranked higher" rule for now (exception Washington). I kinda believe that with Barkley, Washington doesn't do much against USC and I also feel that the Sooners would've pounded BYU with Bradford, which leads to my higher votes for those two squads. By season's end, I believe the Sooners and Trojans will have redeemed themselves. I really don't feel like GT should be punished as harshly as they were. We played 3 games in 11 days for God's sake. Secondly, I remember 2006 where GT WAS BY FAR the best team in the conference and we got smoked by Clemson at Clemson. The year is young and the team will recover (or Dave Wommack will get fired).

Winfield: Well Bird, Pitt manhandled Navy which should have beaten tOSU who you have ranked 14th. So I'll continue your argument and around and around we go! Seriously, Miami looked good on Thursday and if they take VPI to the woodshed, they'll probably get my #1 or #2 vote. Washington moves in the poll because of a well played game against LSU and USC. Can't decide if Boise should be higher and if Oklahoma deserves any accolades. Bring on the conference schedule! Finally, the California Bears...what a game on Saturday by Jahvid Best (Heisman front-runner??) I won't go as far to say the entire team is perfect, but if you can't stop Jahvid Best, does it even matter?

Dane: Out of the top 5, Alabama has the most impressive victories - please note that they are ranked 2nd only because of a .01 stdev difference. They destroyed their patsies and their game against VPI makes for the strongest resume out there. Cal has the most explosive offense in the nation, and their defense looks like the real deal. I don't understand how Washington would not be in anyone's top 15... they played LSU very closely and beat USC. If that isn't top 15 resume, then I don't know what is. OU hasn't done crap, so they get to hang out with us.

Give us your thoughts! Also note that in the official ballot USC and VT are TIED. You, the readers are the tiebreaker!