Share All sharing options for: Miami Preview - Weapons Check at the Door 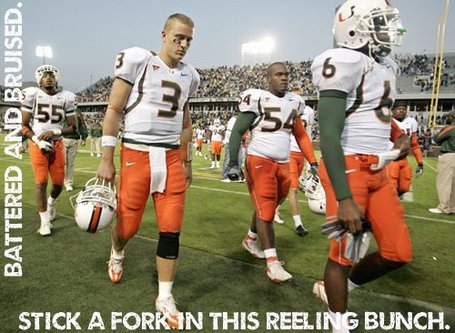 Let's talk about Miami. I don't wanna spend much time on them because I don't care much for the Hurricanes. I don't care about 'em because they didn't take care of themselves when the times were good. They let their facilities decay when they were winning 10+ games/season. They let their program slide into disarray and now almost a decade later (despite their insane fanbase) are finally supposedly rebuilding. So, I don't like the Hurricanes. They are the equivalent of the Pac 10's Washington or Big 12's Colorado in the ACC. Teams of national stature that just don't mean anything to anyone anymore (besides the hardcore fans or the UF/FSU fans that enjoy the demise of the U).

Stats Synopsis
First stat: GT is 10-4 against Miami and has defeated the Canes 4 times in a row. Only Alabama, Florida, FSU, Notre Dame, and VT have defeated the Canes 5 consecutive years in a row with the Hokies being the most recent 5IAR from 1995-1999.

Currently, Miami's defense has only faced FSU's Labor Day Effort. Therefore, we're gonna make some assumptions based on last season (a sometimes deadly assumption) (especially when both coordinators departed at the end of last season. Nix was Tech's best strength against Miami and we saw what happened to Bill Young's defense last week in OKSU/Houston - Dane). The FSU offense last season only passed for 183 yards per game but was second in the ACC with 182 rushing yards per game. In the Miami game last year, FSU racked up around 100 yards over their rushing average but were held to 30 yards short of their passing average on the season. The 2009 Labor Day game saw FSU do even better passing as they passed for 291 yards with a rushing effort of 110 yards. Or in other words, Miami played the exact same as last year's D (if not worse).

If this is any indicator of Miami's offseason, we can see that Shannon worked with his LB's and DL on gap control and form tackling but not much else. The very green (not necessarily young) secondary gave up a ton of yardage through the air.

Miami's D Against the T/O
An interesting fact, if you care to pour over Miami's FSU game stats, is that the starting lineup for the Hurricanes defense only returns 3 guys that saw firsthand the fully operational Tech offense last year. The average age for the Miami D is 2.90 years (or roughly younger than a junior), which ain't too shabby but ain't close to Clemson's crusty group of juniors/seniors. The Miami DL is like Tech's and only returns one starter. And oddly enough he was their leading tackler in the FSU game like Derrick Morgan was ours in the Clemson game. Randy Shannon's D is getting the trial by fire, if you ask me, having to face arch-rival FSU in week 1, Tech's offense in week 2, and the wounded bear offense from Norman.

Jacory Shmacory
The one stat that should bother Tech fans about Miami's game plan is the passing game. FSU was the best passing defense in the ACC last year giving up only 164 yards/game and leading the league with 30 sacks. Harris passed for just over 380 yards and two TD's. The FSU D only managed A sack. He threw two picks. One before the first half ended so it was not that important while the second was actually fairly critical and one of the few mistakes of Harris' night.

I don't think we should sit back and let this guy pass on us all night. College football is won blitzing and beating the QB. Harris doesn't wanna dump and dink. He wants to throw 18.4 yards/completion like he did against FSU, which means he's gonna be sitting back there waiting to get sacked. Get in his face all night consistently and let Tech's O put up points. If we sit back, he'll just throw deep bombs all night. That's what the Miami fans want and they'll get it if we don't bring heat.

Special Teams
GT is blowing away the ACC in punt return average right now. Miami had three PR's for 7 yards against FSU. However, FSU never got to field a punt so Miami's coverage is obviously doing something right considering the U's punts averaged a nice 41.3 yards/punt. Special teams play always makes the GT-UM series interesting. I'd like to see the U give Jerrard Tarrant at least one fair shot.

Run Dwyer, Run
What has Miami failed to do since 2004? I'll give you a hint: 128, 204, 107, 84. Miami has failed to contain GT's primary running back. If Miami can't stop D-Train, turn the lights off at the Shark, pack up the Ed Reed #20 jersey, and sell the fluorescent orange El Camino 'cause GT will roll. Simple as that. Miami has to stop Dwyer to win.