Share All sharing options for: What's in a win.

Looking at a single season's worth of stats is deceiving especially in college football. Different defenses, coaches' backgrounds, talent disparity, etc. create huge abnormalities in college football scoring/yardage data. However, this does not stop those of us that are statistically minded from breaking down every little detail of the data until first kickoff of the 2009 season. Then, continuing the vicious cycle, we engage in the usually fruitless analysis of 2009's data as it pours into our coffers.

Now that I've got you all warmed up on the fun of cfb data analysis, here's a little work I've put together on what it took for GT to win in 2008: 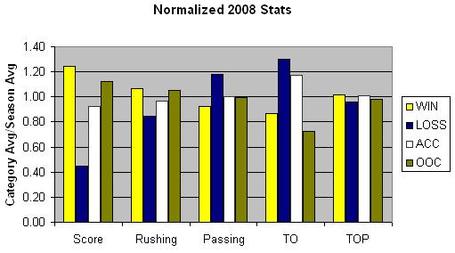 Interesting conclusions can be pulled from this data. For one thing we obviously win when we can run and don't necessarily win when we can pass. Thus, the AJC's poll question, "Does GT need to refine its passing game to win the ACC?" is foolish. GT doesn't need to pass more, we just need to cut down on turnovers. Passing means we're losing. Fumbling a lot or throwing interceptions means we will lose. TOP isn't terribly indicative because we blew out Duke in the TOP category but got smoked by FSU in TOP.

Also, I saw CollegeGameBalls efforts in finding ridiculous college vanity tags and took it to another level for Tech fans. Here are some Southeastern specialty plates that may or may not make it through DMV screening: 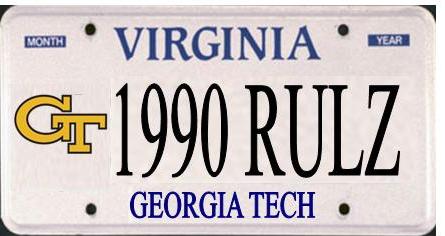 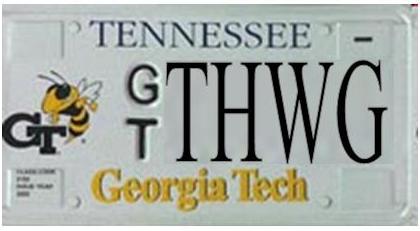