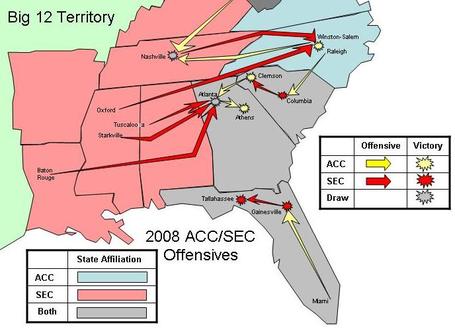 In 2008, twelve major conflicts of athletic prowess occurred across the plains of the Southeastern United States. Football teams of the Atlantic Coast Conference and Southeastern Conference met on the college gridiron to decide conference supremacy. Twelve games were played. These were the games:

08/28/08: South Carolina - 34, NC State - 0 (Columbia, SC) - The first offensive made by either conference was NC State's surge into the Midlands of South Carolina. State was routed in 3 quarters. This started the ACC's decent down a slippery slope of media perception to start the season.
08/30/08: Alabama - 34, Clemson - 10 (Atlanta, GA) - Clemson and Alabama met in the first of three contests for the supremacy of the Capitol of the South. Alabama, like their South Carolinian brethren, fought like a large man defending a plate of biscuits and gravy. Clemson, led by the worrisome Bowden, never stood a chance.
09/06/08: Florida - 26, Miami - 3 (Gainesville, FL) - Not many ACC fans were prepared to see Miami defeat the Gators on September 6 but the defense of Miami defied Florida temporarily. Albeit the game was decided before it was played.
09/06/08: Wake Forest - 30, Mississippi - 28 (Winston-Salem, NC) - In one of the most overlooked conflicts of the year, struggling Wake Forest defeated the surging media darling Ole Miss. 2009 predictions have Wake at the bottom of the ACC yet Ole Miss at the top of the Nation...interesting.
09/20/08: Georgia Tech - 38, Mississippi State - 7 (Atlanta, GA) - The first decisive victory for the ACC was Georgia Tech's throttling of Mississippi State.
10/25/08: Duke - 10, Vamderbilt - 7 (Nashville, TN) - Duke took down the Commodores in the greatest offensive North of the Blue Ridge Mountains. That was a helluva barn burner!
11/29/08: Florida - 45, Florida State - 15 (Tallahassee, FL); Wake Forest - 23, Vanderbilt - 10 (Winston-Salem, NC); Georgia Tech - 45, Georgia - 42 (Athens, GA); Clemson - 31, South Carolina - 14 (Clemson, SC) - Rivalry weekend saw the ACC split its games with the SEC. Both conferences exchanged pretty hearty blows but none were quite as resounding as Georgia Tech's victory over arch-nemesis Georgia in Athens.
12/31/08: LSU - 38, Georgia Tech - 3 (Peach Bowl); Vanderbilt - 16, Boston College - 14 (Music City Bowl) - New Years was a down week for ACC teams... 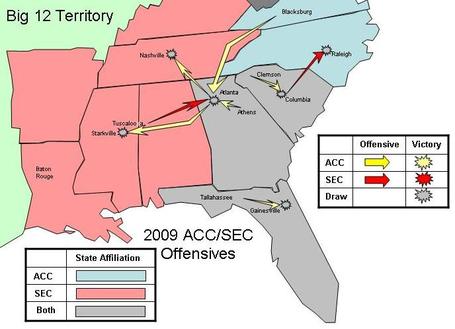 Concerning the 2009 offensives into enemy territory, there are six regular season confrontations. South Carolina travels to Raleigh to attempt the sweep. A rejuvenated NC State offense led by RW should be able to handle the Coots, however. Alabama and Virginia Tech meet in the Dome three days later. Georgia Tech takes on SEC foes Vandy, Mississippi State, and Georgia. And FSU looks to avenge the 2008 dismantling at home in Tallahassee.

Why do these "offensives" mean anything to the average football fan? Well, for one the winner's conference receives a lot positive media attention (vice versa for the loser). Another important factor is the recruiting aspect. Did you notice the trend by ALL of the Southern teams to gravitate towards ATL? Scheduling aggression is another key point. How aggressive is your football program? Will they play a team several hundred miles away in hostile territory to increase exposure and help in recruiting? Also, are the two teams affiliated through coaching trees or AD ties? And finally, the "offensives" are fun for the fans. Playing teams with historical ties, high rankings, or in the vicinity of your personal team encourages ticket sales and local interest.