Share All sharing options for: Pre-Season Blogpoll Ballot for Review

As we proudly announced earlier, From The Rumble Seat will be participating in the 2009 Blogpoll.  If you are unfamiliar with the blogpoll, click here.  Basically the blogpoll is the AP Top 25, just with bloggers. There are two rounds of the blogpoll each week. We will submit our initial poll on Sunday/Monday (basically a rough draft) and then YOU the readers will tell us where we messed up and try to convince us to change our rankings. So here is our first rough draft preseason poll. We will submit our final draft a day or two before August 24th, the final due date. If you have any issues with our rankings, let us know in the comments.

First, let's clarify how we devise our Top 25 poll since there are 3 of us. The first criteria for determining rank is combined average amongst Dane's, Winfield's, and Bird's top 25 poll. Second, if there's a tie, we use the standard deviation amongst our rankings to further scrutinize the polls. A higher deviation amongst us means we agree less and the less-agreed-upon team is listed below teams of similar FTRS affinity. Thirdly, and only in terrible situations of statistical failure, we'll use DFJ's opinion to break SUPER ties (like the Big 12 system, only better).

Now, let's say Winfield includes Western Kentucky in his week 2 poll but Dane and Bird leave them out of the rankings completely. Well, we have come together and decided that one FTRS member's vote of confidence is enough for at least 30th on the other two polls so WKU will receive a rank of 30th in the other two polls (for calculation purposes). This will prevent "rogue voting" and keep our polls looking fairly mainstream. 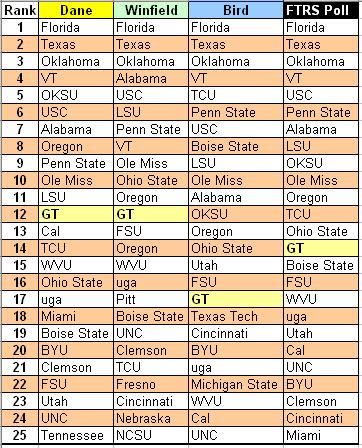 Winfield: I made picks based maybe a little too strongly on how teams fared at the end of last year and my personal convictions.  I attempted to counter those thoughts by thinking of each team's respective schedule.  Georgia Tech has the schedule that can lift them to the top. So let's vote on the potential and see what happens.

Picks I'll probably regret are putting Penn State and Ohio State so high. Honestly, I don't trust the Big 10.  Also, Ole Miss and Oklahoma State are on extremely thin ice. They must continue to impress me.

However, that doesn't make for good discussions. While it doesn't exactly give everyone an even playing field, I've put a lot of emphasis on how I think people will fare in their schedules, and am willing to give teams the chop as soon as they show weakness. For example, Oklahoma State is probably going to be decked harder than anyone else if they drop a game, but that is the price for being entrusted with Dane's confidence. West Virginia, I'm looking at you, too.

Picks I know I'm going to regret: Oregon. Tennessee is a hunch, but will probably embarrass me. (As a matter of fact, I'm putting them up there because I think they will snag some SEC games, and the rest of the SEC is ranked so highly in the preseason, so by winning, their SOS will weaken and they will probably not move much... I'm vicious, I know).

I will regret thinking the Big East and the Big Ten suck, especially not giving the Bearcats props. I will regret not telling the entirety of the SEC save UF that they are a bunch of sissies, except for uga, who are just a bunch of jackass redneck douchebags with a decent schedule. I'll get my chance once the resumes start coming in, but for now, they are getting my props.

Bird: Now, concerning my picks I went with teams I felt would probably win their conferences and ascend the polls by season's end losing maybe 1 game. Hence, the relatively high picks for non-BCS teams like TCU, Boise State, Utah, and BYU.

I feel like GT's good but we just aren't good enough to win all of our games on the season. I see too many pitfalls (e.g. @FSU, UNC, @UVA) for GT to make a solid run at a high ranking. I think we can definitely make a great run at the ACC Title but not a Top 10 finish.

Picks I'll probably regret TTU, Ole Miss, and OKSU. I see these three teams with the highest potential of falling on their faces. And some Big East team will probably ascend pretty high this year as there's plenty of open air on the way to a Big East title this year.