The mascot post had a comment suggesting analyzing the colors of Division I-A teams. I started to analyze the colors and frequency but couldn't really come up with an interesting idea. But, I did start looking at average RGB values of school colors across conferences, comparing GT to averages, and comparing conferences. For example, here's a breakdown of ACC/SEC schools colors in RGB form: 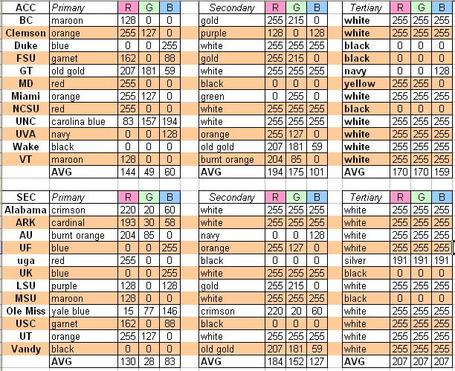 Both conferences lean heavily on the color red in their primary color and then add a more balanced secondary color. This is actually common across all of football. For comparison's sake, here's GT/uga and SEC/ACC's average colors compared visually: 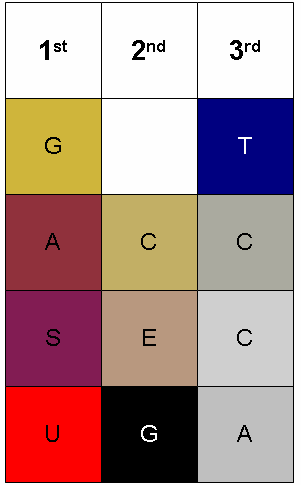 Interestingly enough, all of the BCS conferences average a very reddish tinted primary color. I'm assuming this a trend away from duller blues/greens, which would match the grassy fields. Perhaps, it's also a display of the inherently violent nature of humans in athletics to want colors that resemble blood, burns, and injury - sticking with the vibrant reds, oranges, and gold and avoiding the cool, peaceful blue hues. Another theory is that red matches blood and your players won't look quite as beat up if their blood isn't visible (especially in the pre-facemask era).

On a side note, I included the tertiary color because originally college teams had three colors. UGA originally was crimson, black, and gold WAY back in the late 1800's and early 1900's. When it came time for Tech's team to choose our three colors for our first ever game in 1892, we selected navy, white and OLD GOLD to piss off UGA. In 1893, we defeated UGA in our first ever meeting further infuriating the dogs so they took gold off their list of official colors and changed it to silver.