Share All sharing options for: A Look at 2008 Season Parity

Recently, an anonymous FSU blogger mentioned looking into comparing the ACC conference game point differential to NFL game point differentials. I thought it was an interesting idea until I realized it would entail some sort of truncation and subjectivity due to the different styles of scheduling/parity/postseasons in the NFL vs. CFB. So instead of analyzing the NFL, I went with the ACC's arch nemesis: the SEC. 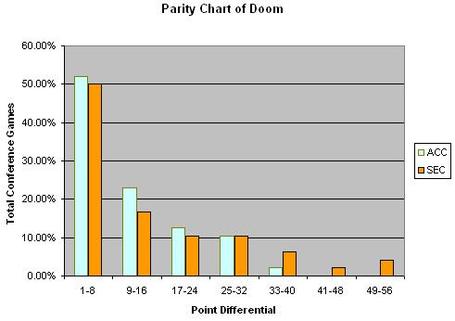 An interesting point is the SEC's tendency to run up the score in conference games (6 games with greater differentials than all 48 ACC games). Not very gentlemanly but it makes sense for the drooling, bloodthirsty SEC fans. Games decided by a field goal or less = 13 for the ACC, 12 for the SEC. Pretty similar but factoring in the ACC's 3 overtime games, I chalk it up for the ACC. 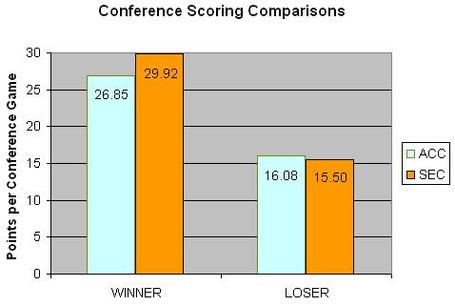 The chart above further illustrates the point of parity: 1) SEC teams are running up the score. 2) SEC trailing teams quit early and let the other team score as much as they want in blowouts.

And in the last chart we observe the scores of winning teams, losing teams, SEC teams, and ACC teams in the 2008 ACC-SEC matchups. The SEC won a lot of blowouts. The ACC won some close ones.