Share All sharing options for: 2009 ACC Media Predictions Broken Down

Bird has been having some trouble at work with the new dashboard, so he sent me his post. He continues to look at the ACC Media predictions and how accurate they can be...

Edit: 1:30 PM: There were a few statistical errors in the data. All should be fixed now.

2009 Predicted Finish - (2005-2008 Predicted Finish Average - 2005-2008 Actual Finish Average) = 2009 Bird Method 1 Predicted Finish
So for example, FSU in ACC media days has been a darling averaging a predicted finish dead between 1st and 2nd in the Atlantic Division (or 1.50) over the past four years.  But the 'Noles have only managed to average roughly a 3rd place finish in the Atlantic since 2005 (2.75).  Factor in the 2009 1st place prediction we have for the 'Noles and here's the formula:
1 - (1.50 - 2.75) = 2.25
As you can see, the formula mostly will not produce whole numbers so the rest of the division must be computed.  The lowest results in the Method 1 Champion while the highest total results in the Atlantic's predicted last man.  Lastly, I also came up with a Method 2 that is based solely on actual finishes within each division to predict a Champion.  Here's the table of results: 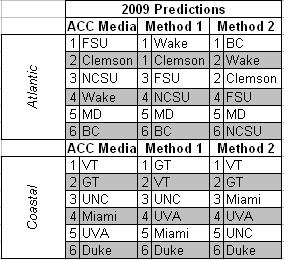 Interestingly enough, BC typically finishes way over the ACC media's predictions but this season cannot overcome the lack of hype by the media.  Even the Eagles' uncanny ability to overcome media bias isn't enough to win in Method 1.  GT finishes over VT because GT routinely outperforms expectations while VT merely wins the division when they're predicted. Thus, the Hokies are not helped by Method 1 at all.
If you wanna see the data I extrapolated from ACC Media Days of Yore in a more interesting form, then look below. I've created two graphs.  The first is a Preseason Hype Graph showing the Range of Preseason Predictions (blue bar) since 2005 for every team along with the Average (Green dot).  The second is an Actual Margin of Excellence Graph showing the range of actual finishes within each division for each team since 2005 along with the average finish. 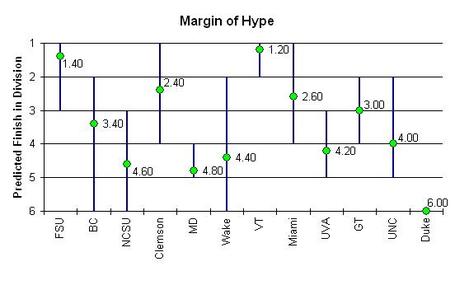 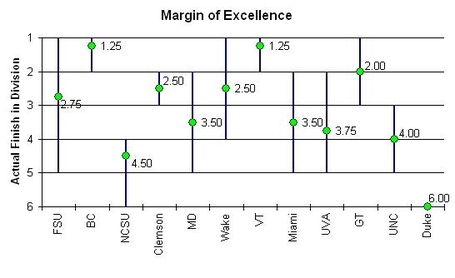 Take what you want from the data.  Big ass fanbases help the hype, media expectations, seasoned QB's that should perform, etc..