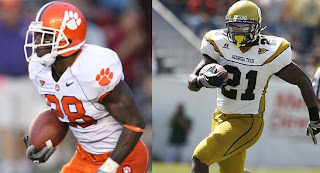 As the ACC's only fringe Heisman hopefuls, Jon "D-Train" Dwyer and CJ Spiller are arguably the best two returning players in the ACC. A look at their numbers reveals their primary differences in style. Dwyer is the fullback in Paul Johnson's run, run, and run some more offense while Spiller is the speed back and primary returner for Clemson's fire-another-offensive-coordinator-offense: 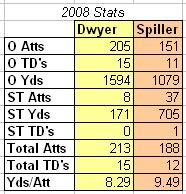 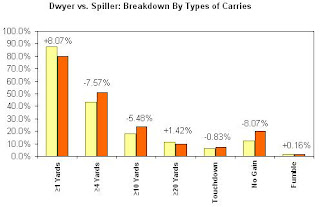 Note: Dwyer is the yellow bars while Spiller is the orange bars.

What the charts tell me is that Dwyer is running up the middle a lot (DUH) and Spiller is taking sweeps, tosses, etc. to the outside. Dwyer will almost always gain yardage and if the safeties get burned he will score. Spiller will eventually get forced out of bounds but his plays are more likely not to yield positive yardage. I think the two backs are an excellent example of the different styles of RB play.

Questions for Discussion:
1. Could Dwyer/Spiller fit in the other's offense?
2. Who will have the more successful year?
3. Who has a shot at ACC POY, national position award, or Heisman?
4. Who could eat more hot dogs?