Let's say offenses are cars. GT would be a German sports car. Fast, incredibly efficient, and well engineered. Iowa's would be an F-150. It's American made so it's normal looking to the average football fan. It gets the job done but is prone to stalling or just breaking down. If it weren't for the winch (defense) on the front end, that truck'd be stuck all the time.

So with that leadoff, let's look at Iowa's offensive efficiencies compared to GT's like we did last week against Clemson. The first chart I'm gonna produce for you includes all of Iowa's drives for the entire season negating kick returns for TD's and kneel downs. This excludes Georgia Tech's game against Jacksonville State because it was a blowout (as I-AA games should be, Iowa fans) and Georgia Tech's return TD's and kneel downs are also excluded. So the % value is what percentage of your drives end in the indicated result:

Hopefully, Iowa fans are pretty riled up right now. Not because of me and my GT bravado but because of how inept the Iowa offense appears when compared to GT's. I'd wanna fire my offensive coordinator with those kinds of stats. Not only is Iowa's offense punting 40% of the time, they're also going three and out ~20% of the time. If Iowa averages 12 legit offensive drives per game, then 2 of their drives are automatically useless because of fruitless three and outs. GT loses about 1 drive per game to three and outs.

By now, I'm starting to feel the heat from the Can't-stanzi-ya pundits. So, I will cut Iowa a small break and break everything down by QB at the helm. And the Iowa fans are right. Iowa's offense without Stanzi is like Seinfeld without Kramer. It just ain't that good. 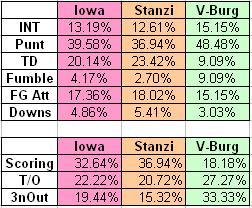 Vandenberg is probably a nice guy but the stark contrast of his offense versus Ricky's is amazing. Stanzi's injury coupled with Vandenberg's bloodless coup have pulled down the offense like a lead weight. If Stanzi doesn't play, Iowa will not be able to keep up with GT. I don't think a month of practice will benefit Vandenberg or the Hawkeyes. They need Can't-stanzi-ya.