Full steam ahead (figuratively and literally)

Share All sharing options for: Full steam ahead (figuratively and literally)

So, this past week I intended to travel with several Clemson fans on down to Tampa for Saturday's game. The plans fell through when they decided to leave from Greenville instead of Columbia adding about 6 hours of round trip driving to my already 20 hour trip. This was Woden's day so I started scrambling for cheap plane tickets or acquaintances of friends of cousins' roommates to see if I could find another carpool and avoid a 20 hour car ride alone. Nothing doing. Most of my Clemson acquaintances in South Carolina just didn't have the heart to drive down to Tampa and plane tickets were around 500 bucks round trip.

Then, The Lady friend suggested Amtrak. And sure enough tickets to Tampa were around 105 bucks round trip. My weekend was saved. (Disclaimer: I am notoriously cheap unless it's for my female or my car)

The train ride was really not too bad of an experience. If you want to see the most Godforsaken country on the Eastern seaboard, ride a train. There are some desolate areas along the Amtrak lines. For the most part, it's about as smooth as a plane in mild turbulence. There's really no formality or super rigid protocol like flying, which is why I can see trains as a possible terrorist target. You just show your ticket and get on. No metal detectors or baggage check. But really, the only contraband on the train was hard liquor and beer.

Most of the people were traveling for the holidays from the concrete jungles of the Northeast to South Florida. Or they were going to Disney World. I'd say my return train had about 5 or 6 Tech fans and a hand full of Clemson fans going back to Charleston. Most of the passengers didn't appear to be that bad off. The first guy that sat next to me on the way down, however, was desperately unemployed and looking for work in Florida. He had all of his personal belongings in a couple suitcases. Pretty ballsy to pick up and move like that. I think he was kinda the exception but probably not too rare for Amtrak seeing as it costs nothing to go from NYC to Miami on a train versus flying that same distance (especially if you have a lot of spare time).

Now, the sacrifice made on a train ride to Tampa really is time. I rode the train to Orlando, picked up a thruway bus to Tampa, and took a cab to the stadium. I used the same three modes of transportation to get home. Here's a chart of how my weekend's time was spent (on foot = time actually in Tampa): 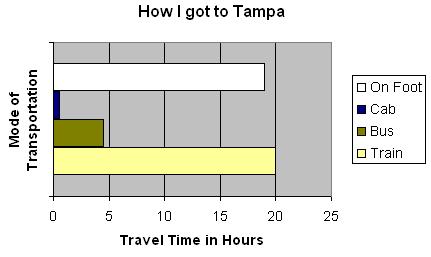 So if you're sad that there was no content or local newspaper linkage on Sunday, I'm sorry. I was still on the train at that point. Concerning the game, GT and Clemson played an epic game. This was the best ACCCG thus far. It makes up for Pat Nix's failures ten fold. I'm really sorry to hear about Phil Smith breaking his leg in front of his home crowd. Hope he gets well. Also, I felt like the game would've had a few more thousand fans in Jax this year and would've definitely sold out in Charlotte. The travel time was pretty difficult for any fan just because Tampa isn't a major air hub and is just out of normal-person driving range from ATL/South Carolina.

GT and Clemson's offenses played like it was their last game left on Earth. The only miscues were caused by the 3 or 4 plays that the respective defenses decided to play big. But really, who prefers a 9-6 Mud Bowl over what we got Saturday night? It was the best game on television. UT-UNL was won by field goal kickers and defensive tackles. Bama steam rolled UF. Cincy-Pitt was probably similar to an unbiased viewer except for the lack of star power. GT-Clemson had a heckuva lot more NFL draft picks in it than the Big East game of the Year so maybe the NFL fans out there enjoyed the ACCCG just a little bit more as they drooled over the hopes of drafting C.J. or J-Diesel. All in all an epic game.

I'm just happy we're not playing Boise State or TCU. For them, it's a lose-lose to play eachother obviously. Nothing is gained beating a non-BCS team. They've both already done that 10+ times this season. They want to dance with the hot East Coast women not the average lookin' Midwesterners. For GT, it would've been a lose-lose to play either of the BCS busters 'cause we get no respect for winning or losing the game. Iowa is a win-win for the Big 10 and ACC (the two major conferences with the most damaged rep of the season). Iowa and GT will sell out the Orange Bowl and avoid the David meets Goliath action. GT knows this feeling all too well...

I bet the biggest issue the OB had with TCU was ticket sales. TCU couldn't sell out their last home game against New Mexico in arguably their best season ever. How can a bowl game expect them to travel with 30,000+ across the country? How can anyone hate the OB for choosing Iowa? The OB really needed some legit ticket sales after last year's disaster.

Other sports topics I'd like to cover real quick are men's bball and C.J. Spiller. Hoops destroyed the Trojans on Saturday night. We're talking 2003-2004 romp-style. Tech opened the game on a 19-0 run. We've got legit three point shooters and dominant big men. The ACC season should be incredibly fun.

C.J. Spiller should win the Heisman. The guy is unstoppable. He has a nose for the end zone, has break away speed, and plays tough despite lingering injuries. His career numbers are amazing let alone his season numbers. I think it'll come down to him and Mark Ingram and Ingram will probably win but I just kinda think the nod should be given to the senior that's done it for four years on a less talented team over the guy that's had a great season on a great team.