Tech is facing a pretty hapless Trojan squad on Saturday at AMC. The Trojans lost their head coach from last season, just got dominated by Texas on national television, and 68% of the 2008-2009 game experience did not return to this year's squad.

The Trojans are led by 6'10" sophomore Nikola Vucevic and 6'5" guard Dwight Lewis. Both are leading the team in minutes and points per game. Vucevic is easily pulling a double double every game while fellow forward Alex Stepheson is not far behind. Stepheson transferred from UNC in July of 2008. Looking at how these guys have progressed, we can see if they've become more efficient since last year's beating of Tech. 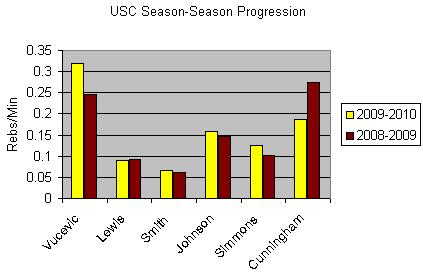 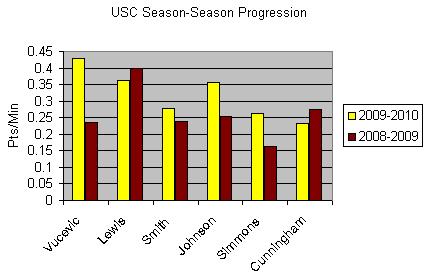 You can see that Vucevic is a heckuva lot more efficient this season. He's definitely more productive scoring around 10 more points a game and grabbing about 10 more boards per game. More importantly, Lil Romeo has only contributed 12 minutes and 3 points to the Trojans' season. As a team the Trojans have cut their opponent's scoring average by 4 points but on the season the offense has averaged -7 points off the 2008-2009 average tally. Tech needs to limit Vucevic and Lewis and the result will be a clean victory.