I don't really feel like breaking down Clemson too terribly much for the preview this week. I wanna look into what it takes to make it to the ACC Title. Here are some trends since 2005 that I'm gonna break down even further.

Battle of the Techs
The Coastal Division Champion has emerged from the Georgia Tech-Virginia Tech 5 straight years. Georgia Tech and Virginia Tech are the only two Coastal teams with winning records against ACC opponents since 2005. They are also the only two Coastal teams with winning records against the Atlantic. Both teams sport an impressive 11-4 record against Atlantic foes since '05. Combining VT and GT's records makes the rest of the Coastal seem even more inept as the Tech combo have a 59-21 ACC regular season record since 2005 versus the other four are an abysmal 58-102. Bringing out the old chart of ACC Coastal division races, we can see that no other Coastal teams have really contended for the Division crown outside of Miami in 2005 and UVA in 2006. Otherwise, the Division has been a two horse race since its inception. 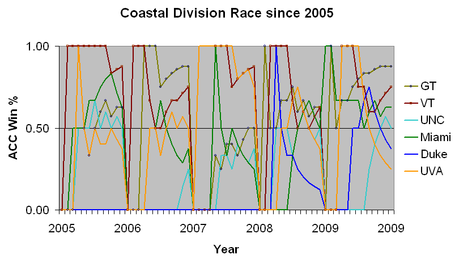 Eb and Flow of the Atlantic
The Atlantic has had four different champions in five years. That's pretty impressive. The only other I-A division to replicate this feat from 2005-2009 was the MAC Eastern Division. Needless to say, there's a good bit of parity and depth in the Atlantic as opposed to the Coastal.

ACC Scoring Offense/Defense vs. Winning
One of the positive trends about ACC Division Champions is that no ACC Division Champion has ever scored less than their ACC opponents for the year. The closest call was BC in 2008. They scored 206 points in ACC regular season play and gave up 204 points. There were 28 different teams that have allowed more points than they've scored since 2005 in ACC regular season competition.

Concerning defenses, the ACC has been notoriously stifling until this year. The average ACC offense scored 22.0 points/game from 2005-2008 in conference play. In 2009, ACC offenses upped the conference scoring average to 26.8 points per team per game. Bad defenses? Maybe. Better offenses? Definitely.

The ACCCG is chalk full o' Ballers
I'm a pretty big NFL fan and I like to see GT players succeed at the next level. Fellow NFL fans should watch the ACCCG 'cause eight players have been selected in the first round of the NFL Draft following ACC division championship seasons. B.J. Raji and Matt Ryan from the 2008 and 2007 Boston College Eagles. Calvin Johnson from the 2006 Georgia Tech Yellow Jackets. Ernie Sims, Kameron Wimbley, Broderick Bunkley, and Antonio Cromartie from the 2005 Florida State Seminoles. And Duane Brown from the 2007 Virginia Tech Hokies. I wouldn't be surprised if there are three or more NFL first rounders playing in Saturday's game.

2006 ACCCG Ghosts
Personally, I hope the guys that are redshirt juniors and seniors are talking up this game to the younger guys. 2006 sucked big time. We went down to Jacksonville after an embarrassing loss to Georgie and further embarrassed ourselves and the conference with the greatest display of offensive futility since this. Pat Nix put the final nail in his coffin after having a break out year. Thankfully, Miami "stole" him from us.

Two guys on our current squad played against Wake Forest: Robert Hall and Cord Howard. I hope they're telling everyone that the last thing Georgia Tech fans want is a loss on Saturday. I guess if there's one good thing that will come from Saturday it will be the fact that no one has to go back to Tampa if they lose.