The Top 2 Georgia Tech Headlines and Moments of the 2000's

Share All sharing options for: The Top 2 Georgia Tech Headlines and Moments of the 2000's

Today, we unveil the top headlines and moments in Georgia Tech Athletics history of the 2000's. I attempt to talk about them in words, but let's be honest, pictures and videos say it all. Part 1 here and Part 2 here.

The Yellow Jackets did something that hadn't been done in almost 20 years. Win the ACC outright. With the combined powers of Derrick Morgan, Jon Dwyer, Morgan Burnett, JOSH NESBITT and Paul Johnson, we are going to our first ever BCS bowl thanks to an ACC Championship! 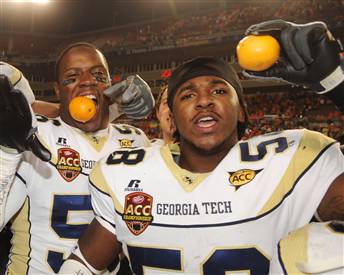 1. The 2004 Final Four and National Title-Runner Up

March brings a sense of excitement into the air, especially around tournament time, maybe it's the basketball games at noon during a weekday. Regardless, it's more exciting when you're watching your team run through the tournament, or beat Kansas in St. Louis in person as they head to the Final Four in San Antonio. It was a great moment, that I will surely never forget and I hope none of you do as well. The 2004 squad was a team in every sense of the word, led by Jarrett Jack, everyone else had a role and knew their role. And then how can you forget about Will Bynum?! Enough of me talking, here's our best moment of the 2000's: