Winfield, before departing on his epic interstate journey, sent Block-C a set of questions. Willy Mac and Chili scribbled some answers down on used napkins and Fed-Exed them back to Winfield. Block-C sent us questions as well and here are our answers. Here are their responses to our questions:

1. Once again, we're gonna ask how many trick plays will Dabo call and how many of these plays will result in turnovers or points for GT (examples: 1, 2, and 3)
Well, the first trick play was an illegal one ya'll ran that should have been called on the field. Who thought CPJ was such a huge fan of The Little Giants? Great movie and I hear that he swears by it, even forcing players to stay extra after film sessions sometimes to watch it. So, in summation I don't know how Dabo runs a trick play for your team... uh... next video. That was Dabo's first game as our interim head coach and you can chalk that one up to first game jitters. We've seen plenty of trick plays, so surely Dabo & company aren't naïve enough to run something they've shown in the regular season against a defense as good as Tech's. I'd say zero as ball management and control will be key issues seeing as they led to our demise against Carolina.

2. Battle Royal in a steel cage. Mike Hogewood, Heather Dinich, John Swofford, Ron Cherry, Ted Valentine, Dean Smith, Jay Bilas, & Bill Curry all enter a steel cage. Who climbs the ladder and takes the ACC Personality Championship Title Belt?
Ok, you gentlemen just mashed three different types of matches up. You really swung for the fences with that one... shoulda hit the abort button. Being from Atlanta, the heart of traditional old school southern wrestling, you guys should honestly know better, be ye Tech nerd or lowly Lavonia-dwelling tire burner. How about this, we'll just make it a Hell in a Cell match? Can we agree to those terms? If we're going with those rules I'd have to choose Mike Hogewood. No one brings destruction like the Hog. He's also the new on air announcer for Ring of Honor. If we're going Battle Royal you gotta go with Swoff as he's squatty and a heel. He loves to fuck people over. He's from the Triangle so he knows the cheap tricks like blading and eye gouging. Ladder match would go to the high flying and nimble Heather Dinich. But all must pay the toll to the Hog first and foremost. 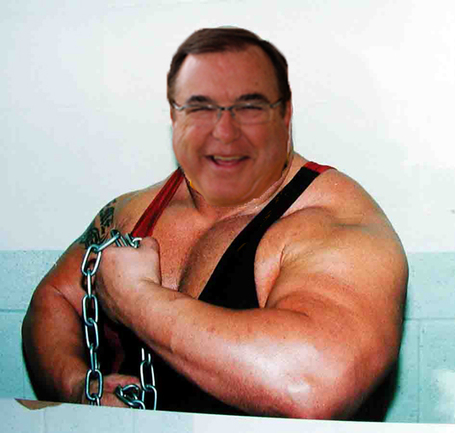 3.With the loss to South Carolina, is it killing any of the Clemson buzz to come to Tampa?
Of course it is. You guys know exactly what we're talking about. Nobody want's to see bumper stickers that say something to the effect of "SEC Dogshit Team 1, ACC Champion 0" you know? But again, every once in a while you have to drop one to little brother so it's not that big of a deal. They're going to crow for a year, then we'll beat them the next three or four times. It feels alright now that we're one week removed because it reminds you that they'll be going to a super shitty bowl game and we are playing for a chance to get a BCS bowl.

4. Willy and Chili, before the game...group hug and a case of beer to wash the wounds away?
Sure, but you better not be looking for an goose up the leg. We know how you Tech guys roll and we aren't into that stuff, thank you kindly good sirs. Also, you're gonna have to get the beer. Look man, we just had to pay the cell phone and cable, we're fresh out of money man. But hey, we're good for it. You know that right? We got you man. Don't worry. Next time man. We know we stiffed you on the last beer run too, but cmon, we're friends... we're good for it.

5. Read into your Clemson crystal ball. What is in Kyle Parker's future?
Seeing as he's way better in baseball and technically he's a junior in that sport, we seem him probably bolting for the money. He's going to be looking at a humongous payday in the MLB and he's a preseason collegiate All-American. Either way, we have a capable back up in Tahj Boyd. We'll have to go through the growing pains again, but this year he's been running the scout team and DeAndre McDaniel (our awesome safety) says that Tahj Boyd is the best quarterback in the ACC that the first string defense has faced this year. So... poot on you guys next year.

Thanks for the response Block-C. We hope you lose.