Hunting for Hawkeyes with the Natives Part III

Share All sharing options for: Hunting for Hawkeyes with the Natives Part III

For our third installment of Hunting Hawkeyes with the Natives, we go on the trail with Rodger Sherman of Sippin' on Purple, a Northwestern blog. Click here are Parts I and II.

After talking to Rodger it seems that Northwestern fans don't hate Iowa, rather they are grateful for Iowa:

A few weeks ago, me and a bunch of friends were watching Jersey Shore, and this prompted a debate about which state we'd be the least disappointed if one day, we woke up, and it just no longer existed. Somebody brought up Iowa, and I was quick to point out that without a state in the middle in the country that's basically one enormous cornfield, and has a healthy 5:1 pig:human ratio (I believe this is close to accurate, I'm not just making up numbers to make Iowa seem like a hick state), our lives would be significantly less delicious. Thanks, Iowa!

Well, we could go to Nebraska for the corn, but making up for the pigs loss would be difficult. So, thank you Iowa for the bacon I had this morning!

Iowa fans call Northwestern "jNU" which stand for "just Northwestern" which we have seen quite a bit over here on FTRS. Northwestern fans don't mind being called "jNU". As long as you win, who cares? as you can see here.

Personally, I think it's kind of funny, considering we've won four of the last five games in football, and in all likelihood are going to pull off the football-basketball sweep this year. You can call my team whatever you want, so long as you graciously continue to lose conference home games against us.

It sucks when you talk crap about a school and then they beat you. That's the truth. In closing, Sippin' on Purple reminds you:

Yellow Jackets fans, remember, next time you enjoy some popcorn or bacon, remember, a Hawkeye fan was likely to thank for it. Be grateful, and be willing to look over the fact that one in every three Iowa males has had some form of sexual encounter with a pig in a cornfield.

Lesson for the day: Don't hate Iowa. Because, just like georgie, someone needs to make the food for us. 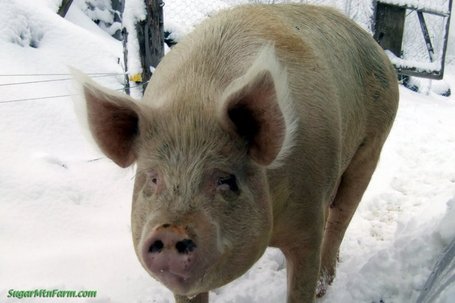 Iowa: Gives a whole knew meaning to "squealing like a pig"