Games of Christmas Past

Share All sharing options for: Games of Christmas Past

December 25, 1978 - Peach Bowl loss to Purdue, 41-21
Purdue destroyed Tech in GT's second appearance ever in the Peach Bowl. Mark Hermann quarterbacked a potent Boilermaker offense that racked up 24 first downs and 323 yards of offense against Pepper Rodgers' Yellow Jacket squad. The big story for Tech leading into the game was the injury to superstar Eddie Lee Ivery in the Georgie season finale. Ivery didn't play for Tech in the bowl and Tech only managed 12 rushing yards against Purdue. Ivery average 142 yards/game in Rodgers' option offense. 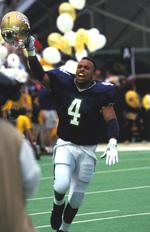 December 25, 1991 - Aloha Bowl victory over Stanford, 18-17
The last bowl game for one of Tech's greatest quarterbacks, Shawn Jones. The win was an exciting one as head coach Bobby Ross chose to go for 2 and the win when Tech scored with only 14 seconds remaining. On the two point conversion, Jimmy Lincoln took an option from Jones around Tech's right end for the score. Ross was quoted, "We didn't come all the way over here to play for a tie."* Tech legend, Willie Clay, set up the game winning scores by returning a punt 63 yards to the Cardinal 31 yard line.

* Note - Ties were eliminated from CFB in 1996 so this game was several years before college overtime rules.