Hunting Hawkeyes with the Natives: Part I

Share All sharing options for: Hunting Hawkeyes with the Natives: Part I

Winfield and myself devised an interesting way to get to know the deep, dark secrets of the Hawkeye fans and team without having to consult Hawkeyes directly. We saw the idea on The Rivalry, Esquire so it's not totally original but still pretty cool. We're reaching out to the rivals of our upcoming opponent in an effort to gain more knowledge. It's the old proverb "the enemy of my enemy is my friend."

The first response came from the Minnesota blogger, Gopher Nation from the Daily Gopher. He equates the Hawkeyes to the state's pseudo-pro team. The one team that unifies the entire Iowan populace:

First of all there is nothing else in Iowa (nothing). All they have is Hawkeye football and wrestling (yeah, wrestling). So they are VERY hyper-sensitive about their team. For instance, if you were to suggest that Paul Johnson is a really good coach and his system may present problems for the Hawkeyes. They'll hear that you are saying Kirk Ferentz is the worst coach in DI and is allegedly a child molester. They cheer for the Cubs, Vikings, Twins, etc. But those teams are not THEIR teams like the Hawkeyes are.

Wow, I think we've dealt with that directly on this blog whenever we mentioned the Hawkeye offense's struggles. Hypersensitive is a good way to put it.

We then asked Gopher Nation to highlight some interesting stories and tidbits about the Hawkeyes so that we could get to know the fans a little bit better:

Last year at the Metrodome two Hawkeye fans had sex in a bathroom stall. The woman was married, the dude had a girlfriend. They met at the dome and got busted banging in the stall. This has been a staple for getting Iowa fans worked up. Orange Bowl officials really should be made aware of this trend and be prepared.

That is the definition of an awkward story if I've ever heard one. Wow is all I can say... Apparently, the Minnesotans have even developed a cheer for Iowa similar to the Good Word:

The chant Gopher fans have is someone yells, "Who hates Iowas?" And everyone responds, "We hate Iowa." But I think that is pretty much a Minnesota thing.

Poetic, to say the least. Another interesting tidbit Gopher Nation mentioned was that Hayden Fry had the Iowa visiting locker room painted pink including the urinals: 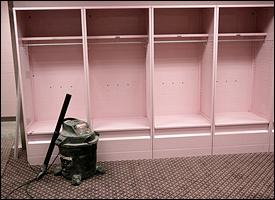 The apparent goal according to Fry:

One thing we didn't paint black and gold was the stadium's visitors locker room, which we painted pink. It's a passive color, and we hoped it would put our opponents in a passive mood. Also, pink is often found in girls' bedrooms, and because of that some consider it a sissy color.

We don't need no stinkin' political correctness in Iowa! In closing the Gopher blogger mentioned that he wanted Iowa to win for the Big 10. So he didn't hate on Iowa the whole time, just 99% of the time.