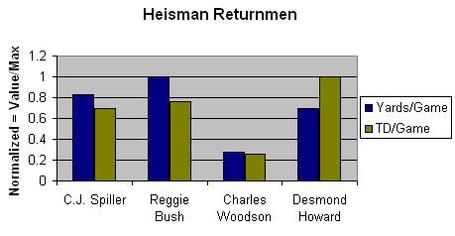 In all purpose yards/game, Spiller is quite comparable to Desmond Howard while his TD's per game is more similar to Reggie Bush. Reggie Bush is hard to beat as he played in a relatively weak defensive conference and pretty much got the ball whenever he wanted. Spiller also doesn't have near the surrounding talent that allowed Bush to pile up yardage against puny Pac 10 defenses. Woodson and Howard's stats are difficult to compare in all purpose yardage because of their positions. 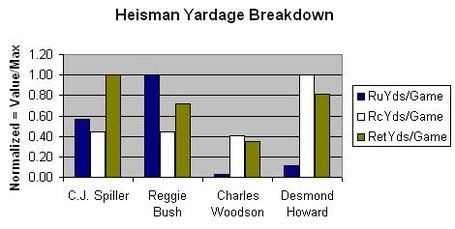 Splitting up the yardage by type shows why fans of C.J. and Clemson's sometimes fruitless offense love C.J. Spiller. He gives Clemson good field position and 18.52% of his returns, he'll put 6 on the board.

The main flaw in C.J.'s campaign is that these other three guys had a Heisman tipping point that put them over the top against quarterbacks. Reggie Bush was a threat to score on every offensive play and would've had even more rushing touchdowns if not for the presence of the touchdown vulture. Charles Woodson was a great defensive back and a phenomenal weapon for Michigan's offense. Desmond Howard broke Notre Dame and Ohio State's backs in the same season with game breaker, nationally televised plays.

What do you all think? Does C.J. Spiller deserve the Heisman over guys like Case Keenum, Toby Gerhart, Colt McCoy, Mark Ingram, or even Tim Tebow?