Getting To Know the Hawkeyes' Traditions

Share All sharing options for: Getting To Know the Hawkeyes' Traditions

Georgia Tech and its fans pride themselves themselves on traditions of the Institute, both in football and academia. From the Ramblin' Reck to Rat Caps to Budweiser, every tradition has a story that we know and love.  Some of the best traditions in college football are traditions that can just be considered "dumb" with "dumb stories" from outsiders such as dotting the "i" in Ohio State (I didn't call it dumb), the mascots of Auburn, and yes, even Budweiser. As such a tradition-rich school like Georgia Tech, I wanted to see what type of traditions Iowa holds.

Why a Hawkeye? The term "hawkeye" was first used in the book "Last of the Mohicans"  and it was later used as a term to describe those who lived in the Iowa area in the the 1840's. I could not exactly find the relation between Iowa and Last of the Mohicans. I guess it just sounds cool or something.

Mascot: Their mascot is a hawk named Herky, a reference to Hercules. Costumed Herky is older than Buzz, first taking the field in 1959. I guess it's more original than Buzz.  Herky's head is made of ceramic which lets him have his mouth open at all times and seemingly willing to eat small babies in one fell swoop.  Naturally this is a terrifying thought to a small child and I can only imagine how many kids run away from the sight of the Hawk running up to them, wings spread out. 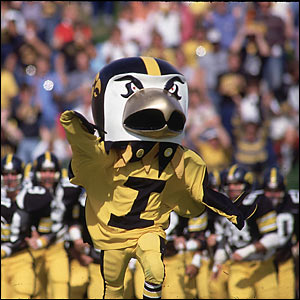 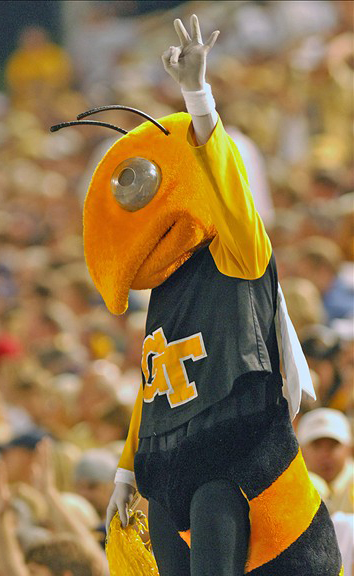 Bears!: Just like Georgia Tech, Iowa also has had a bear live under the bleachers and serve as an unofficial mascot. Unlike, Georgia Tech, this bear was not a product of a Rose Bowl victory and the story does not end well.  The Iowa bear's name was "Burch" and he was imported from the land of Idaho. From the years of 1908-1910, he was the school's unofficial mascot as he lived in the stadium and toured the sidelines until he drowned in the Iowa River.  Yet again, Georgia Tech proves to win in the "unofficial mascot Bear war" in that "Bruin" AKA "Stumpy's Bear" outgrew his stadium and was donated to the zoo. Though, we do have "Sideways the Dog" a lovable pup who died due to eating rat poison.

Fight Songs: Their fight song pales in comparison to ours. All fight songs take a backseat to ours. The songs goes as follows (click the lyrics to hear the song):

Yes, I will take drinking and daming the rival please.

School Colors: The Iowa Hawkeyes wear black and gold and I don't know why. We wear gold because we wanted to insult the university [sic] of georgia by beating them handidly in a color they refused to wear because they believed yellow was"cowardly."

War Heroes: Both Iowa and Georgia Tech have men who are influential in Heisman Trophy history who leave their impacts beyond the gridiron.  Iowa has a man by the name of Nile Kinnick who won the Heisman in 1939 and was a consensus All-American that same year. During World War II, Kinnick was a Naval pilot. In 1943, Kinnick was flying a routine training mission off the coast of Venezuela when he had to do an emergency landing in the water and died in the process. His body was never recovered. Nile Kinnick is one of two numbers retired in Iowa football history.

Georgia Tech has a similar story that we all know, the story of Clint Castleberry.  In 1942, Castleberry's freshman year, the Yellow Jackets went 11-2 with Clint finishing 3rd in the Heisman race which is still the highest a freshman has ever been placed for the Heisman.  After the 1942 season, Castleberry joined the Army Air Force. On November 7, 1944 Castleberry was flying a B-26 Marauder over Liberia.  He never arrived at his destination point and was never heard from again. To this day, Clint Castleberry's jersey number (#19) is the only number to ever be retired in Georgia Tech football history.

Iowa fans! Did I miss any key event or tradition?